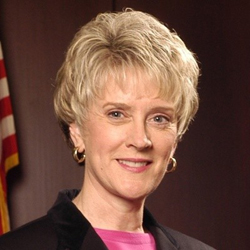 The Honorable Ruth V. McGregor, Chief Justice of the Arizona Supreme Court, will serve as the second annual McAfee & Taft Jurist-in-Residence at the Oklahoma City University School of Law. Justice McGregor will visit OCU March 3-5 for a series of events, lectures, and classroom appearances, as well as a public lecture titled “The Rule of Law in Challenging Times” at 5 p.m. Tuesday, March 3 in the Homsey Family Moot Courtroom. Justice McGregor also will meet with OCU law school faculty and alumni as well as members of the Oklahoma City legal community throughout the week.

Justice McGregor earned bachelor’s and master’s degrees at the University of Iowa before graduating first in her class from Arizona State University College of Law. She clerked for U.S. Supreme Court Justice Sandra Day O’Connor after graduating and earned an LL.M. from the University of Virginia. She serves as a member of the Board of Trustees of the American Inns of Court Foundation, as vice president of the National Association of Women Judges, and served on the Central and East European Law Initiative for the American Bar Association. She was a founding fellow of the Arizona Bar Foundation and served as President of the Arizona Judges’ Association.

McAfee & Taft is one of the largest, most experienced law firms in the Southwest, serving clients throughout the region and nationally in the areas of aviation, business law, business restructuring and bankruptcy, corporate and securities, employee benefits, entertainment law, environmental law, healthcare, intellectual property, labor and employment, litigation, oil and gas, real estate and tax and family wealth.  The firm employs over 275 Oklahomans, including more than 145 attorneys, and has offices in both Oklahoma City and Tulsa.