Barn burners and brushes with celebrity

This is the fourth of our year-long weekly history featurettes celebrating the firm’s 70th anniversary. (Please note: There is no audio in the above motion graphics.)

The list of people who invested in the Blackwood & Nichols’ joint venture drilling fund that McAfee & Taft co-founder Kenneth McAfee registered with the Securities & Exchange Commission in late 1950 reads like a who’s who of the rich and famous – Hollywood celebrities like Ginger Rogers, Walter Pidgeon, and June Allyson, as well as business magnates from such noted companies as General Motors, Chrysler, S.C. Johnson & Son, Pillsbury, and Schlitz Brewery.

And it’s no wonder. At a time when the top income tax rate in the United States was 90%, here was an opportunity that offered wealthy investors considerable tax advantages due to the fact that equipment costs could be depreciated and a significant amount of certain intangible oil and gas drilling costs could be written off. Even the prospect of drilling a dry hole presented relatively little financial risk to an investor in the highest tax bracket.

“So they dubbed it the ‘riskless oil investment,’ which you would never do today, obviously, because oil and gas exploration is full of risks, but it just so happened that over the years many of the wells on the lands that were drilled with that fund were just barn burners,” said retired McAfee & Taft oil and gas attorney Terry Barrett.

The most famous of the “barn burner” wells were located in the Northeast Blanco Unit (NEBU) in northeastern New Mexico. More funds, more investors, and more drilling activity would follow.

Over the years, these historic transactions would provide several close encounters of the famous kind for members of the McAfee & Taft family. Early on, while her dad and his clients were meeting with interested investors in downtown Oklahoma City, Mr. Mac’s daughter, Jaci Williams, remembers peering through the windows of the Beacon Club to catch a glimpse of stars like Hollywood power couple Robert Taylor and Barbara Stanwyck. Decades later, when Mr. Mac proposed a change in the legal structure of the partnerships that would require the signatures of the investors, it was Terry Barrett who would have his own brush with celebrity, having the opportunity to reach out to a host of famous actors, actresses and other famous stars, including filmmaker Alfred Hitchcock and even Oklahoma’s own Mickey Mantle. 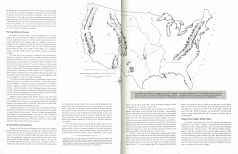