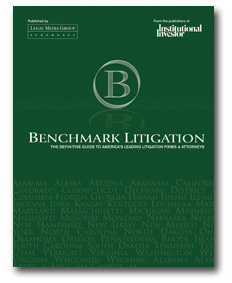 McAfee & Taft once again earned top marks in the 2021 edition of Benchmark Litigation, a leading independent guide to the nation’s top trial lawyers and litigation firms. The firm received the publication’s highest ranking of “Highly Recommended” in the state of Oklahoma in both ranked categories – dispute resolution and labor and employment litigation. In addition, 23 of the firm’s attorneys – the most of any law firm in Oklahoma – were singled out for individual recognition.

Benchmark focuses on the U.S. litigation market, with a research team conducting extensive interviews around the country with leading legal professionals, in-house counsel and business owners.