Anna DeShazo brings decades of experience to her role as a legal assistant working with trial lawyers engaged in the representation of some of the nation’s leading manufacturers and distributors of consumer and commercial products, including major automakers, in high-stakes product liability, mass torts, class action, and complex business litigation in state and federal courtrooms across the country. Her responsibilities include preparing and filing pleadings, reviewing and organizing discovery documents, preparing and organizing documents and exhibits, and preparing for hearings and trial.

Anna’s litigation experience includes the support, administration and organization of teams in trial in cases. She has provided in-trial litigation support in dozens of cases throughout the country. Anna has worked with witnesses, prepared pleadings, helped develop examinations, and organized exhibits in her trial support role.

Anna began her legal career as a legal secretary in 1973 and worked for three law firms and a district attorney in southern Missouri over the course of 21 years before moving to Oklahoma in 1994. Since that time she has worked with the same litigation team, including working for the Tulsa-based boutique litigation firm of Eldridge, Cooper, Steichen & Leach. She joined McAfee & Taft in 2011 when the two firms merged.

Anna holds a degree in secretarial science from Arkansas State University in Jonesboro, Arkansas, and an associate’s degree in paralegal studies from Drury College (now Drury University) in Springfield, Missouri. 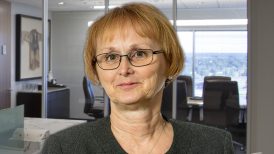