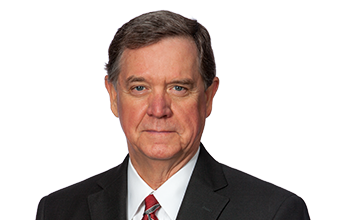 David Stinson joined McAfee & Taft in 1976 and retired in January 2019.  Over the course of his distinguished career, he established himself as one of the region’s most trusted go-to energy lawyers, representing individuals and companies of all sizes engaged in the business of oil and gas exploration, production, gathering, transportation and marketing. His practice included stock and asset acquisitions and dispositions; mergers and other business combinations; financing arrangements, including secured and unsecured borrowings, private placements, Rule 144A transactions, and volumetric production payments; exploration, development and operating contracts; partnerships and joint ventures; pipeline and gathering agreements; natural gas and crude oil sale and purchase contracts, including advice concerning hedging strategies; and other matters customarily associated with the general representation of independent oil and gas companies, including advice to management, shareholders and boards of directors.

David’s achievements earned him top marks by the editors of the Chambers USA Guide to America’s Leading Lawyers for Business and recognition in Oklahoma Super Lawyers and The Best Lawyers in America. He was selected by Best Lawyers as 2012 Oklahoma City Oil and Gas Law Lawyer of the Year,” an honor only given to a single lawyer in each legal specialty in each community.

Prior to attending law school, David served for more than four years as an officer/aviator in the U.S. Army, including one year in South Vietnam where he served as a helicopter gunship pilot with an air cavalry squadron.