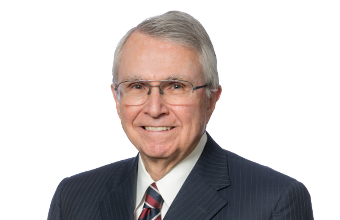 Gary Fuller joined McAfee & Taft in 1965 and retired in 2015 after 50 years of service to the firm. Over the course of his distinguished career, his expertise and noteworthy achievements as a tax and transactional lawyer earned him recognition in three of the nation’s most prestigious publications, The Best Lawyers in America (business organizations; closely held companies and family businesses law; corporate law; mergers and acquisitions law; tax law; trusts and estates), Oklahoma Super Lawyers and Chambers USA Guide to America’s Leading Lawyers for Business. In the latter, he garnered specific recognition for his familiarity with the tax implications on complex transactions, particularly mergers and acquisitions. He was also named “Best Lawyers‘ 2011 Oklahoma City Corporate Lawyer of the Year,” an honor only given to a single lawyer in each legal specialty in each community.

In addition to having lectured extensively to lawyer groups on tax planning subjects, Gary also served as an instructor at the University of Oklahoma College of Law. He also authored “Fixing Oklahoma’s Insurable Interest Laws,” 78 Oklahoma Bar Journal 1271.

Prior to receiving his Master of Laws degree, Gary served as an attorney in the Judge Advocate General’s Corps of the U.S. Air Force.