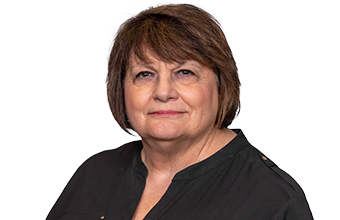 Glenda is an active member of the Central Oklahoma Association of Legal Assistants and currently serves as the organization’s treasurer. In 2014, she was named COALA’s Paralegal of the Year.

Glenda attended Oklahoma State University and, as part of her specialized education, has participated in intellectual property courses offered through the University of Oklahoma’s legal assistant program and various continuing legal education seminars.

Active in the community, Glenda is president of her neighborhood’s homeowners’ association, and is a member of the Dream Maker’s Investment Club. She also formerly served in numerous officer positions with the Edmond Mothers Petite Club. Glenda has also volunteered her time for many civic and charitable organizations, including the Juvenile Diabetes Research Foundation, Cystic Fibrosis Foundation, Susan B. Komen Foundation’s Race for the Cure, Arthritis Foundation, American Heart Association and Oklahoma Lawyers for Children. She is also active in her church and has been involved in prison, community outreach and singles ministries.