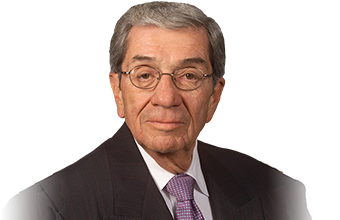 John McHenry Mee joined McAfee & Taft in 1971 and concentrated his practice in corporate, securities, and financing law for more than 40 years. Over the course of his distinguished career, he served as lead counsel in more than $2 billion of mergers and acquisitions and various forms of financings, including public offerings involving enterprises engaged in the food, energy, environmental, manufacturing and publishing businesses. He also served as lead trial counsel, advisor and consultant in numerous litigation and arbitration matters.

His noteworthy matters include:

John’s achievements earned him inclusion in The Best Lawyers in America (corporate Law) for more than 20 years. He is the co-author of “Specialized Approaches to Outsourcing Legal Work” (Chapter 26) of Successful Partnering Between Inside and Outside Counsel, published by the American Corporate Counsel Association and the WestGroup in September 2000.