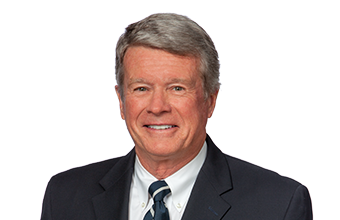 Prior to retiring in February 2020, trial and appellate lawyer Reid E. Robison concentrated his practice in business-related litigation, including antitrust, securities, products liability, tax, and white collar criminal cases, contract and insurance disputes, and multi-district and other complex litigation in courts throughout the United States. As part of his appellate practice, he appeared and argued cases in Oklahoma and Delaware and before the U.S. Courts of Appeals for the Fifth, Eighth, Tenth and Eleventh Circuits. He also was involved in a successful appeal in the Supreme Court of Virginia.

Reid’s skills as a litigator earned him inclusion in several prestigious industry publications, including Benchmark Litigation, The Best Lawyers in America (antitrust litigation; appellate practice; bet-the-company litigation; commercial litigation; environmental litigation; legal malpractice law–defendants; mass tort/class actions–defendants; product liability litigation–defendants; qui tam law; securities litigation; tax litigation and controversy), Chambers USA Guide to America’s Leading Lawyers for Business and Oklahoma Super Lawyers. He had been perennially listed in all three publications since their inaugural editions and was named to Super Lawyers’ prestigious list of “Top 50 Oklahoma Lawyers” from 2008 to 2013. He was selected by Best Lawyers as the “Oklahoma City Appellate Practice Lawyer of the Year” for 2013, an honor only given to a single lawyer in each legal specialty in each community.

Reid was a fellow and former state chairman of the International Academy of Trial Lawyers and a fellow of the Litigation Counsel of America, a trial lawyer honorary society dedicated to promoting superior advocacy, professionalism and ethical standards among its fellows.

Following graduation from law school, Reid served as an assistant attorney general of the state of Oklahoma and as a captain in the Judge Advocate General’s Corps of the U.S. Air Force.