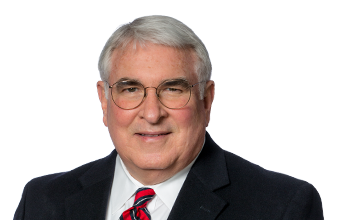 Terry Barrett’s oil and gas experience began in his teens as a roughneck in the oil fields of southern Oklahoma. His undergraduate degree in petroleum land management at the University of Oklahoma was a natural progression from this beginning, as was his law degree, also from the University of Oklahoma, where he received several oil and gas law-related academic and writing awards.

Terry joined McAfee & Taft as an associate in 1973 and became a shareholder in the firm in 1977. For more than 40 years, he provided legal assistance involving virtually every aspect of the energy industry, from advising and working with clients in their day-to-day operations and the multitude of agreements affecting those operations to handling extremely large acquisitions and sales of producing and non-producing properties and related assets. Terry was also routinely involved in advising and representing clients regarding a multitude of tax, litigation, environmental and all other concerns implicit in conducting operations within the oil and gas industry.

His achievements earned him inclusion in the Chambers USA Guide to America’s Leading Lawyers for Business, The Best Lawyers in America (natural resources law; oil and gas law), and Oklahoma Super Lawyers.

Prior to entering law school, Terry served two years as a lieutenant with the U.S. Army in California and in Vietnam and one year as a landman for Mobil Oil Corporation in Oklahoma City. He continued his land position with Mobil on a part-time basis during his law school studies until joining McAfee & Taft as a law clerk in 1972.