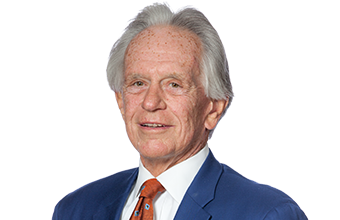 Bill Rodgers originally joined McAfee & Taft in 1965 when the firm consisted of only 11 attorneys. After practicing in the area of business law for three years, he returned to his hometown in northern Oklahoma and embarked on a career in banking that lasted for more than 35 years. He rejoined the law firm in 2003 before retiring in 2013.

Throughout the course of his distinguished banking career, he served as a trust officer, president and chief executive officer, and regional president of a major national bank and its predecessors. He also served as president of Midland Trust Company, a position he held from 1998 to 2002.

While living in northern Oklahoma, he served as president of the Blackwell Chamber of Commerce for two terms and as president of the Blackwell Industrial Authority. In recognition for his numerous contributions to the community, he received Blackwell’s Outstanding Citizen Award in 1992 and was later inducted in the Blackwell Public School Foundation Hall of Fame in 2006. He has also served as a member of the Ponca City Industrial Authority and as a regent for Northern Oklahoma College.

Bill’s contributions to the community are extensive and include having served in leadership positions with the Phi Gamma Delta National Foundation, Oklahoma City Golf & Country Club, Allied Arts, and University of Oklahoma Associates Program.

Prior to entering law school, Bill served as an officer in the U.S. Navy for two years. He also served as a law clerk for the Hon. Alfred P. Murrah, chief judge of the U.S. Court of Appeals for the Tenth Circuit, before embarking on his career.