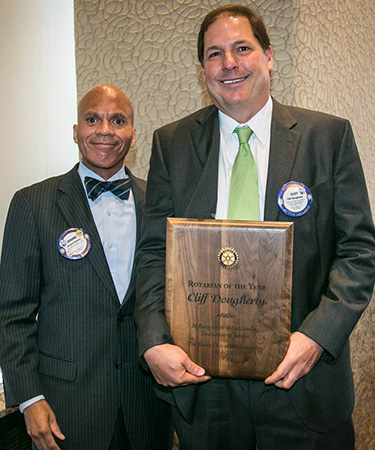 Rotary Club of Oklahoma City, the largest club in Rotary International, honored McAfee & Taft attorney Cliff Dougherty with its Rotarian of the Year Award at the organization’s end-of-year awards luncheon on Tuesday, June 30th, at the Petroleum Club in downtown Oklahoma City.

The Rotarian of the Year Award honors those whose dedicated contributions of time, service and leadership have made a significant impact on the club. In presenting him with the award, the Hon. Jerome Holmes, outgoing president of Club 29, recognized Cliff’s extraordinary efforts in leading the new member recruitment committee “with incredible sound judgment and integrity throughout the year.” He noted that new members are the lifeblood of Club 29, and that membership in the club has grown to include 665 members.