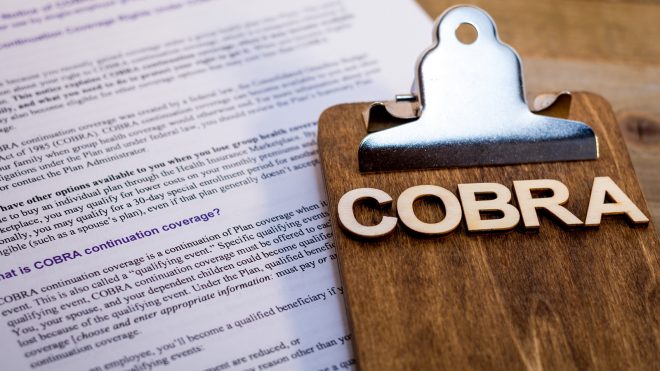 Late last week, President Biden signed the American Rescue Plan Act of 2021 (ARPA), which makes COBRA continuation coverage free for certain qualifying individuals and their families from April 1, 2021 to September 30, 2021. This free coverage is available to those who lose group health plan coverage because either:

Expired COBRA Participants have a new 60-day election period that begins April 1, 2021 to newly elect COBRA, but this does not extend their normal COBRA period (e.g., if they were entitled to 18 months of COBRA because of a termination of employment that occurred in November of 2019, their coverage would still expire April 2021).

Employers are required to notify the individuals described above of this new free coverage and its availability, including Expired COBRA Participants. The ARPA requires the federal government to issue a model notice for this purpose by April 10, 2021.

We suggest you immediately get with your COBRA administrator and make sure they are on top of these new rules. You will want to identify individuals who could have been entitled to COBRA (because of job loss or reduction in hours) during the period from April 1, 2021 to September 30, 2021 – including Expired COBRA Participants – because you are going to have to give them a new notice and a new election period. Given the very complicated guidance (DOL Notice 2021-01) we received a few weeks ago that basically gives every COBRA-qualifying individual their own one-year extended period to elect COBRA coverage, and that guidance’s own notice requirements (in addition to that described above), COBRA is now free and very complicated.

If you have any questions, including any questions about how the subsidy will be paid to the plan or plan sponsor, please contact a member of the McAfee & Taft Employee Benefits and Executive Compensation Group.