By Roberta B. Fields

I miss my dog … or how to require your employer to let you bring your dog to work.

Angry in the workplace

Assaturian was hired by Hertz in 1989. From 2004 until his termination in 2012, he was the location manager for Hertz’s car sales department in Honolulu. In this position, he supervised several other sales employees. Assaturian’s managers were in California, Arizona and New Jersey, and the human resource representative over his department was located in California. The facts show there was very little interaction between Assaturian and Hertz management.

During the course of his employment, Assaturian was disciplined for several serious incidents. In 1998, he was disciplined for reprimanding a subordinate in front of co-workers. In 2008, he was issued a final warning after he admitted his inappropriate behavior involving another angry confrontation with a subordinate. He did not tell his employer, but in 2004, he was diagnosed with chronic ulcerative proctitis and ulcerative colitis, which he claimed affected his bowel control, which in turn, caused him to miss sleep. He contended that his ability to concentrate and handle stress appropriately was thus adversely affected. During the investigation of the 2008 incident, Assaturian never mentioned his medical condition, did not mention a disability, and never requested an accommodation.

Employee provides his own doggone accommodation 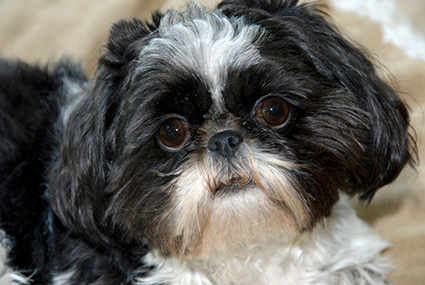 In late November 2011, Assaturian began receiving treatment for depression, dysthemic disorder and adjustment disorder. Again, he did not request an accommodation or notify his employer of a disability, but in late 2010 began bringing Sugar Bear to work, which he continued to do for about a year. He did not inform his off-site supervisors that he was bringing a dog to work, or request permission to do so.

In mid-November 2011, a supervisor, while on vacation, made a rare visit to the Honolulu facility. While there, he noticed the kennel and dogs toys in Assaturian’s office and witnessed the dog running around the facility. Assaturian confirmed the dog was his. The supervisor later testified he never knew Assaturian had a medical condition, much less one that required an accommodation until the EEOC charge was filed.

After the visit and discovery of the dog, HR was contacted to investigate. Other employees said the dog ran around and would urinate on the floor. When Assaturian was contacted by the HR rep, he yelled at her using profane language, would not let her speak, and hung up on her every time she tried to get information about the dog. The HR rep later testified she never had a chance to say Assaturian would need a doctor’s note if the dog was an accommodation for a disability.

Assaturian apologized to the HR rep later the same day by e-mail and said he would contact his personal physician for a recommendation for a specialist as “I am not in as much control as I thought.”

Following his November 17, 2011, conversation with HR, Assaturian did not follow up or provide documentation supporting a request to keep the dog at work. He was terminated March 14, 2012, following an earlier incident that month where he admitted to yelling at a subordinate. The subordinate contended Assaturian yelled at him, pounded on the desk, and followed him out of the office yelling “Get your ass back in the office.” During the investigation, Assaturian again did not provide any information about a medical condition or a disability and did not request an accommodation.

Although suit was filed under a Hawaii statute, the court noted it was substantially identical to the Americans with Disabilities Act. Assaturian was required to show: (1) he was “disabled” within the meaning of the statute; (2) he could perform the essential functions of his job, with or without reasonable accommodation; and, (3) that because of his disability he had suffered an adverse employment action.

If Assaturian could show those three things, the burden would shift to Hertz to show a non-discriminatory reason for the termination. Hertz argued it was entitled to summary judgment, saying Assaturian was not terminated because of a disability, and in any event, Hertz had no notice of a disability. The motion was denied when the court found questions of fact as to whether the decision-makers at Hertz had notice of his disabilities and whether he was terminated because of his disability.

Hertz contended he was terminated for legitimate, non-discriminatory reasons: the inappropriate angry outbursts towards subordinates. Assaturian responded that those reasons were pretextual because the conduct that led to his termination was caused by his disability. The court found that if a “reasonable juror could find that Hertz decision-makers knew of his disabilities, and that those decision makers none-the-less terminated him for conduct that was symptomatic of his disability, Assarutian could arguably succeed on his claim for unlawful termination.”

Although the HR rep said Assaturian never asked about bringing the dog because he had a medical condition, Assaturian said he told HR he had a service animal card, and that the dog helped with his anger issues and helped him control his emotions. The court found a factual issue as to what the employer knew and whether Hertz should have engaged in the interactive process (while noting there was no dispute HR told Assaturian some form of documentation was required to bring the dog to work, and Assarturian never provided documentation). “An employer who fails to engage in the interactive process in good faith is not entitled to summary judgment unless a reasonable finder of fact must conclude that there would in any event have been no reasonable accommodation available,” the court said.

As a side note, after he left Hertz, Assaturian made no effort to mitigate his damages by finding permanent work, so the court found he was not entitled to back and front pay.

Lesson learned: employers need to sniff out the clues

Hawaii is in the 9th Circuit, which has a reputation for being employee-friendly. However, this case is a reminder that no matter the size of your company, employees can’t fall through the cracks. An employer must follow up by using the interactive process when there is even a “hint” that an employee is requesting an accommodation for a disability. Here, Assaturian did make a comment about “not being in control” when referencing an outburst and, taking the facts in the light most favorable to him, that he had a service card for the dog. This is not much to go on, but apparently it could be interpreted as requiring the interactive process. So while the statute says it is the responsibility of the employee to request an accommodation, apparently to some courts, “requesting” can be as simple as dropping a couple “clues.”

As for me, practicing law is stressful, and I am bringing my dog to work.