Courts continue to back employers with strong timekeeping policies, practices 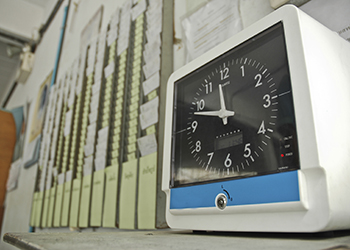 One of the most difficult issues facing employers is off-the-clock work. Employers may find themselves having to pay for this time even if they do not authorize it. Fair Labor Standards Act (FLSA) regulations state that the reason for the unauthorized work is “immaterial.” 29 C.F.R. § 785.111. “If the employer knows or has reason to believe that the work is being performed, he must count the time as hours worked.” 29 C.F.R. § 785.112. FLSA regulations also make clear that simply having a written policy prohibiting off-the-clock or extra work does not shield the employer from payment.

Tenth Circuit sides with employer on enforcement of timekeeping policies

In November 2012, the Tenth Circuit Court of Appeals, whose rulings apply to Oklahoma,  weighed in on the value of timekeeping policies when it decided Brown v. ScriptPro, LLC. In Brown, an employee alleged she was not paid for all work performed – specifically, hours she did not record on her timesheet or otherwise submit for payment in violation of a written policy appearing in the company handbook. The court first noted that “to succeed on a claim for unpaid overtime, the plaintiff has the burden of proving that [she] performed work for which [she] was not properly compensated.” The court found “uncontroverted evidence” she had, in fact, worked hours in addition to those for which she was paid. However, the court ultimately held that the employer was not responsible for its failure to compensate the employee for these hours worked because it had no notice that she had worked them. The court relied on the established principle that “where the employee fails to notify the employer through the established overtime recordkeeping system, the failure to pay overtime is not a FLSA violation.”

Courts have continued to grant summary judgment to employers where employees fail to (1) satisfy their burden of proving they performed work without payment, and (2) comply with timekeeping policies requiring the reporting of hours and underpayment. These decisions have saved employers from paying thousands of dollars in unpaid wages.

For example, in Perez v. Pinon Mgmt., Inc. (D. Colo. 2014), plaintiff filed suit on behalf of similarly situated employees alleging unpaid overtime due to the employer’s failure to ensure employees were not working during designated lunch breaks. The plaintiff challenged the accuracy of time and payroll records. Although she argued generally that she took no time off for lunch, she was unable to “confirm nor deny” whether she was correctly paid during the majority of her shifts. And although she identified two instances where her payroll records were inaccurate, she did not present any evidence suggesting she worked more than 40 hours per week during those weeks. The court found the evidence was insufficient, as a matter of law, to carry the burden of actually proving time worked.

In Jackson v. Corrections Corporation of America (S.D. Ga. 2014), the plaintiff filed suit alleging unpaid overtime. In this jurisdiction, the burden on employees is somewhat relaxed. The court noted that although the plaintiff was required to prove hours worked, it would not interpret this burden to be “an impossible hurdle for the employee.” It also relied heavily on the employer’s obligation to maintain accurate time and payroll records. The employer maintained a policy requiring employees to record their time on a daily basis, verify the hours reflected on their paychecks, and immediately alert human resources of any discrepancies. The plaintiff had taken advantage of this policy and submitted requests for additional payment on several occasions, which were immediately paid. In light of this evidence, the court found the plaintiff failed to prove that she had worked hours for which she was not paid.

In Beolk v. AT&T Technologies (W.D. Wisc. 2013), plaintiffs alleged they were not paid for time spent working during their meal breaks, resulting in unpaid overtime compensation. The employer defended against the case on the basis that it lacked knowledge that its employees were allegedly working during meal breaks. Employees were not instructed not to report overtime hours. They were not told to delete overtime hours recorded. There was no evidence any of the employees had reported the alleged work to managers or supervisors. In fact, several of the employees testified during their depositions that their supervisors did not know they were working during meal breaks. There was simply no evidence that the employer had direct knowledge of the alleged work. There was also evidence that the employees voluntarily failed to comply with mandatory timekeeping procedures. The court ultimately found that “by failing to record their hours accurately and failing to tell their supervisors or managers about lunch break work, plaintiffs prevented defendant from having actual knowledge of their off the clock work.” The employees were not awarded any back wages.

In order to take full advantage of these principles, you must have a written policy that prohibits off-the-clock or unauthorized work, as well as work during meal breaks. This policy should expressly instruct employees to review their pay stubs and immediately report any errors or discrepancies. Be sure to provide periodic training on your written policy, and document employee attendance. Require supervisor approval of off-the-clock or unauthorized work, and train your supervisors how to respond when they see this type of behavior. Monitor employee hours to spot patterns of unauthorized work. And finally, you must coach employees and supervisors when your timekeeping policies are not followed. By following these steps, you preserve the possibility of a complete defense to allegations of unpaid minimum wages or overtime resulting from off-the-clock work.