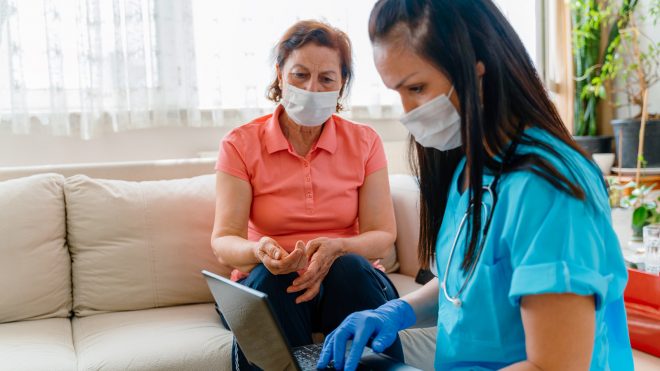 Under Oklahoma law, employees who are terminated from their jobs in violation of Oklahoma public policy may, in some cases, file a wrongful discharge lawsuit against their former employer. Increasingly these lawsuits involve claims that an employee acted as a “whistleblower” by reporting wrongdoing on the part of their employer through social media.

Tracy Peuplie worked as a certified nursing assistant at Golden Oaks Nursing Home in Enid, Oklahoma. Her employer had a policy that prohibited employees from voicing concerns about the employer, supervisors or co-workers on social media. Instead, employees were instructed to raise such issues “through the proper chain of command.”  On January 23, 2017, Peuplie posted the following messages on her personal Facebook account:

10:33am:  It’s just amazing in 30 years I have never in my life worked with an administration staff or a nursing crew that just don’t give a shit!!!! God I wish I could find another place to work weekend doubles with my copilot!!!!!

12:34pm:  I FEEL SORRY FOR THE ELDERLY AND THE NEXT GENERATION TO TAKE CARE OF THEM THEY HAVE NO WORK ETHICS OR EVEN CARE!!! ITS VERY SAD YOUR BETTER OFF LIVING UNDER A BRIDGE IN A BOX THE HOMELESS TAKE BETTER CARE OF EACH OTHER!!!!! IM JUST REALLY DISAPPOINTED IN WHAT I HAVE SEEN AND WORKED WITH LATELY ITS VERY SAD AND HEARTBREAKING ANYWAY THANK YOU TO ALL OF YOU WHO DO MAKE A DIFFERENCE KEEP IT UP!!!!!

According to Peuplie, on January 28 or 29, 2017, she reported inadequate treatment with a patient’s feeding tube to the assistant director of nursing. She also said another nurse refused to provide her medication for a patient suffering from sores. Peuplie alleged that she told the assistant director of nursing and the nurse that she would be making a report of patient neglect or abuse to the state ombudsman. Peuplie called the state ombudsman’s office on or around January 30. On February 2, Golden Oaks Nursing Home fired for her Facebook posts.

Peuplie filed a wrongful discharge lawsuit against Golden Oaks in district court in Garfield County, Oklahoma, contending her termination violated public policy. She claimed she was unlawfully fired for her January 23 social media posts complaining of poor patient care.   Moreover, Peuplie argued that her Facebook messages were not the real reason she was discharged by Golden Oaks. According to Peuplie, the real reason she was fired was because she had reported abuse and neglect to the state on January 30.

The court dismissed Pueplie’s lawsuit and found in favor of her former employer, concluding that Peuplie was not a true whistleblower. Rather than revealing abuse or neglect, Peuplie’s Facebook postings amounted to “rambling and generalized complaints” about her job and workplace. Further, the court rejected her argument that the true reason for her termination was her January report to the state ombudsman. The court found that the facts established Golden Oaks Nursing Home fired Peuplie on account of the Facebook posts – not her call to state authorities.

Although Peuplie’s lawsuit against Golden Oaks was unsuccessful, be aware that employee discharges stemming from social media posts that complain of illegal or unethical practices at work can lead to wrongful discharge lawsuits against Oklahoma employers.