Firearms or marijuana? Federal law says you can’t have one with the other 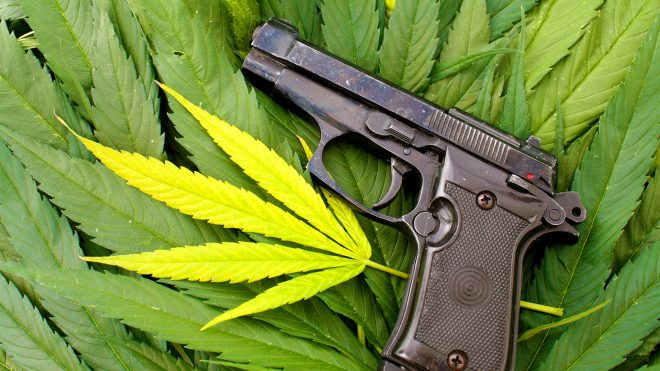 With the medical marijuana licensing process now underway in Oklahoma, it might be well to consider some of the effects that holding a patient or commercial license have on an individual’s ability to exercise the right to keep and bear arms.

First, federal law affects sellers of firearms. On September 21, 2011, the Department of Justice Bureau of Alcohol, Tobacco, Firearms and Explosives (ATF) sent a letter to all federal firearms licensees in response to questions about medical marijuana usage and its effect on their businesses. The ATF reminded licensees that possession and use of marijuana is a federal crime and that it is unlawful for “any person to sell or otherwise dispose of any firearm or ammunition to any person knowing or having reasonable cause to believe that such a person is an unlawful user of or addicted to” marijuana. Consequently, as the ATF pointed out, federal firearms licensees cannot sell a firearm or ammunition to any person that it knows holds a medical marijuana patient license. A 2016 decision by the Ninth Circuit Court of Appeals held this restriction to be constitutional.

A purchaser of a firearm from a federal firearms licensee must complete ATF Form 4473. Question 11(e) asks “Are you an unlawful user of…marijuana…” Answering “Yes” automatically disqualifies the purchaser from the purchase of a firearm. Answering “No” when the answer should have been “Yes” could result in punishment of the responder by up to 10 years in prison and a $250,000 fine.

Although not addressed in the letter, it’s important to note that this federal restriction applies to “any person.” Consequently, the sales prohibition would also apply to private sales. It is unlikely that a private sale to a medical marijuana patient license holder would generate criminal prosecution in the normal course. However, such a sale could lead to criminal and civil liability if the use of the firearm results in personal injury or death. An example, perhaps extreme, is the case of Douglas Haig. He manufactured armor-piercing bullets in violation of federal law. His fingerprints were found on such bullets in the hotel room of Stephen Paddock, the Las Vegas shooter. Even though his ammunition was reportedly not used in the massacre, he was charged with a federal firearms violation. Further, in Delana v. CED Sales, Inc., the Supreme Court of Missouri held that the plaintiff stated a claim where a gun dealer “negligently sold or entrusted” a firearm which was then used in a murder.

In addition, it is a violation of federal law for any person “who is an unlawful user of … any controlled substance … to possess in or affecting commerce, any firearm or ammunition or to receive any firearm or ammunition which has been shipped or transported in interstate or foreign commerce.” Since almost every firearm is “shipped or transported in interstate or foreign commerce” and every firearms purchaser “receives” the firearm, it appears that possession of a firearm by a medical marijuana patient licensee could also be a crime. The ATF letter confirms that assessment. “Therefore, any person who uses or is addicted to marijuana, regardless of whether his or her State has passed legislation authorizing marijuana use for medicinal purposes, is an unlawful user of or addicted to a controlled substance, and is prohibited by Federal law from possessing firearms or ammunition.”

Lastly, growers, processors and distributors of marijuana would also be affected. With current banking restrictions, marijuana businesses are cash businesses. As such, many owners and employees may consider carrying a firearm for protection from thieves. It is a federal sentencing enhancement to use or carry a firearm during a drug trafficking crime. “Drug trafficking crime” means any felony punishable under the Controlled Substances Act (CSA).

We know that it is a violation of the CSA “to manufacture, distribute, or dispense” marijuana. It is also a crime in Oklahoma to possess a firearm in the commission of a felony. However, it highly unlikely that Oklahoma law enforcement would pursue this charge as long as the activity was lawful under state law.

Again, these restrictions are probably not an issue until the owner or employee of the grower, processor or distributor uses the firearm for its intended purpose – namely, to protect the operation from loss and the other employees from bodily harm. If inside the home or business, the Castle doctrine should apply. But, outside the home or business, the shooter cannot obtain the protections of Oklahoma’s Stand Your Ground law if “engaged in an unlawful activity.” So, even if no criminal prosecution were brought, the argument in a civil case would be that the shooter was liable for damages because the shooter was engaged in an activity unlawful under federal law.

The adoption of State Question 788 poses many problems for holders of patient and commercial medical marijuana licenses that are not readily apparent. Further issues will continue to arise as long as marijuana is a schedule one controlled substance.