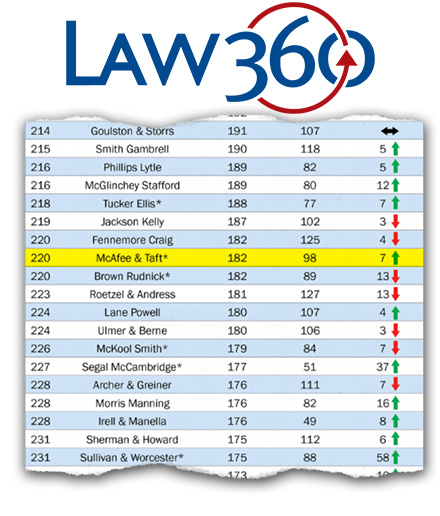 Oklahoma’s largest law firm continues to rank among the nation’s biggest, according to the recently released annual survey by Law360. McAfee & Taft is listed at No. 220 in this year’s Law360 400, moving up seven spots from last year.

The Law360 400 features the largest U.S.-based law firms and vereins with a U.S. component, as measured by domestic attorney head count.

McAfee & Taft’s roster of 182 lawyers counted in this year’s survey remained steady from the previous survey, but saw a jump in the firm’s position due to recent law firm mergers and consolidations as well as declines in previously higher ranking firms. McAfee & Taft also remained the only Oklahoma firm within the top 250 firms.

Topping the list with 1,747 lawyers was Morgan Lewis. Tying for the last spot on the list were two firms with 100 lawyers each.