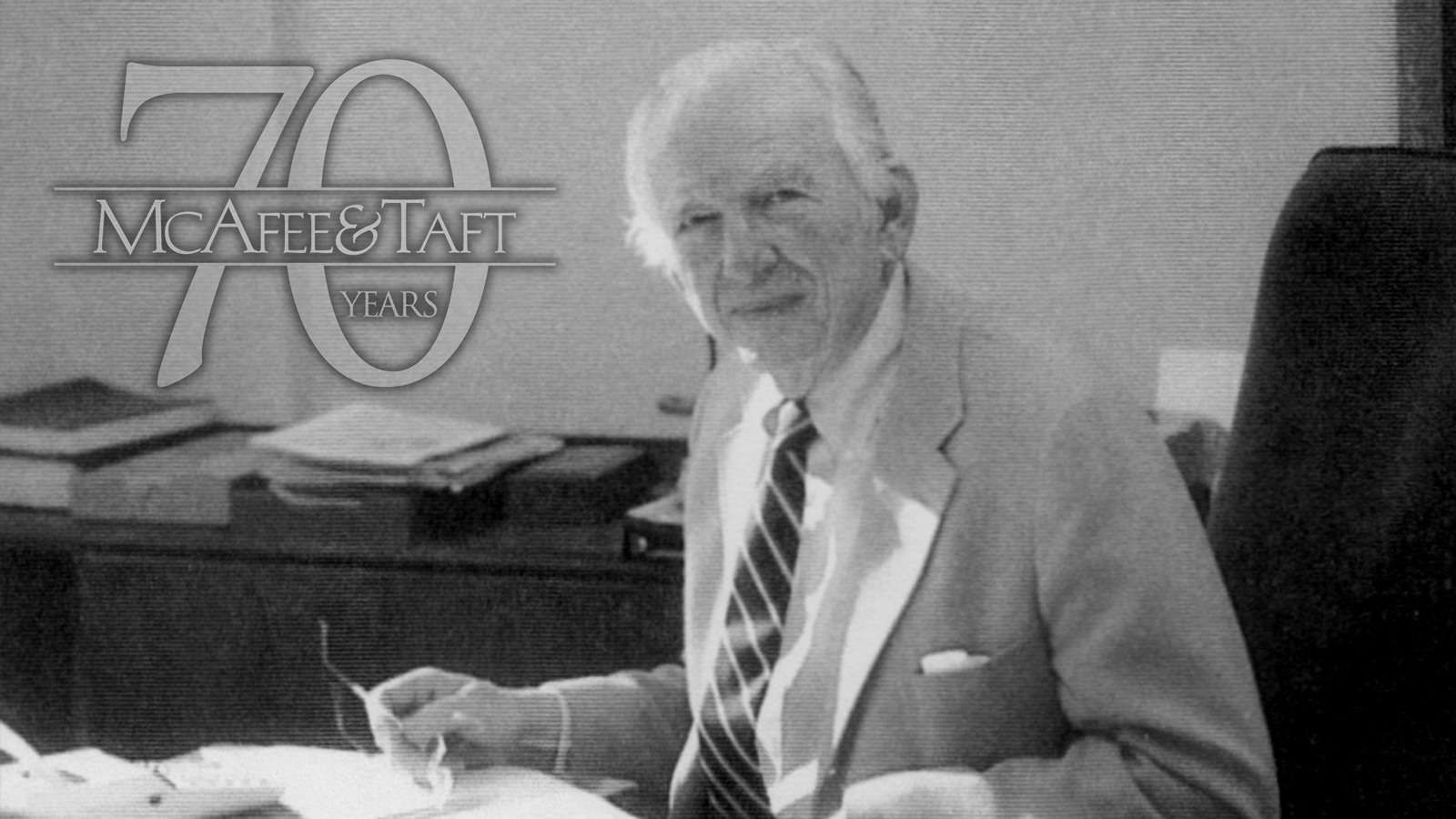 This is the eighth installment of our year-long weekly history series celebrating the firm’s 70th anniversary.

Although soft-spoken and dignified in his demeanor, McAfee & Taft co-founder Richard Taft was known to be tenacious when it came to representing his clients. And that tenaciousness was often expressed in the way he went about solving problems. Whether called upon to discover a new solution or develop a clever workaround, Mr. Taft relished a good challenge.

“Although fully appreciating the limitations imposed by statues and case law, Dick was primarily concerned with his client’s goals,” wrote long-time partner John Mee in a tribute to Mr. Taft. “He loved nothing more than to find a way — and more often it was an inventive way — to ‘wire around the problem.’”

Before joining Ken McAfee in practice in the early 1950s, Mr. Taft worked for two other law firms and an accounting firm and had already established himself as preeminent tax lawyer and certified public accountant. This unique combination of skills and expertise made him a sought-after advisor for clients needing practical, yet innovative, solutions to complex business problems. In some instances, those solutions were truly groundbreaking.

According to Mee, one such matter involved organizing an Oklahoma-based professional services client as Massachusetts Business Trust, which was taxed as a corporation before the days of professional corporations, so that the client could offer corporate-like retirement and health care plans that were tax-deductible.

In another, Keller v. Comm’r of Internal Revenue, Mr. Taft served as lead tax attorney in a landmark case before the U.S. Tax Court that established the validity of a one-person professional corporation. The Commissioner of Internal Revenue had taken the position that there could be no such thing as a one-person corporation and, as such, attempted to allocate 100% of the corporation’s income to the individual instead. Mr. Taft, along with fellow tax attorney John Schaefer and trial lawyer Phil Hart, not only succeeded in making their argument before the U.S. Tax Court, but also had the decision affirmed by the Tenth Circuit Court of Appeals two years later in 1983.

“From a legal perspective, Mr. Taft loved nothing more than to find a way around,” said Terry Barrett. “He and McAfee made a great tag team. Both were innovative and aggressive, and those attributes were passed down by them to all the rest of us.”