It started with a simple handshake

2022 officially marks the 70th anniversary of the founding of McAfee & Taft. Over the course of this milestone year, we’ll celebrate with weekly flashbacks from our firm’s illustrious and interesting history. This week we’ll take you back to how it all began. (Note: There is no audio in the above motion graphics.)

The founding of the law firm of McAfee & Taft began with a simple handshake in 1952. 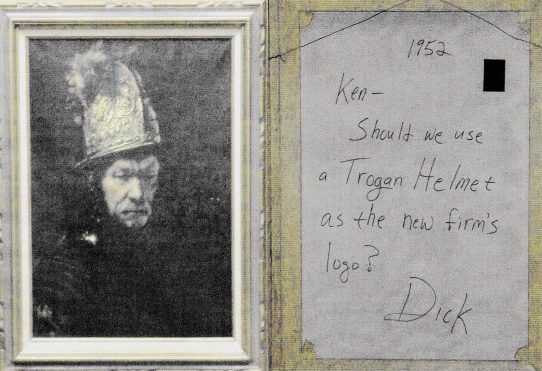 Handwritten note from Richard Taft to Kenneth McAfee shortly after the firm was officially established. [Click on image to enlarge]

Even though Kenneth McAfee and Richard Taft could have chosen to hammer out a lengthy partnership agreement, they didn’t. They knew that what they shared in common – their shared life experiences, strong character, and pioneering spirit – made them strong.  They also knew that what made them different – their unique personalities, talents, and complementary legal practices – made them even stronger.

Both earned their law degrees from the University of Oklahoma – Mr. Mac in 1934 and Mr. Taft in 1940 – and both, quite notably, were certified public accountants as well.  Whereas as Mr. Mac was the consummate transactional attorney, outgoing and enterprising with extensive business connections, Mr. Taft was the consummate tax attorney, a brilliant CPA and gentleman lawyer known for both his practicality and inventiveness as well as his extensive knowledge of the law.

Both also shared the experience of choosing to put their early legal careers on hold to serve their country during World War II.  Eight years after graduating law school, at the age of 39, Mr. Mac joined the U.S. Navy and served as a naval intelligence officer.  Just one year after entering private practice, at the age of 28, Mr. Taft joined the Army Air Corps and served as the director of the Santa Ana Army Air Base.  Both actively served until the end of the war in 1945, with Mr. Mac achieving the rank of lieutenant commander, and Mr. Taft achieving the rank of lieutenant colonel.

Both represented the best of the Greatest Generation.