John A. Kenney, a shareholder with the law firm of McAfee & Taft, was inducted as a Fellow of the American College of Trial Lawyers at the organization’s annual meeting in Toronto, Ontario, Canada, on September 27, joining a select group of litigators in one of the nation’s premier legal associations.

Kenney is an accomplished attorney whose practice includes trial of complex cases involving intellectual property and other technical and scientific issues.  In recent years, he has successfully represented clients in noteworthy patent litigation resulting in more than $20 million in awards and in major products liability litigation involving pharmaceuticals.  During the course of his 33-year legal career, he has handled and tried cases, arbitrations and administrative proceedings and hearings in numerous state and federal courts in the United States, Virgin Islands and several foreign countries in matters involving intellectual property, product liability, oil and gas, environmental, antitrust, securities fraud, and other contract and general business issues.

Kenney’s achievements in the areas of intellectual property law and litigation have also earned him inclusion in Chambers USA Guide to America’s Leading Lawyers for Business, The Best Lawyers in America and Oklahoma Super Lawyers.

The newly inducted Fellow is a graduate of the University of Oklahoma College of Law.  He is admitted to practice in all state and federal courts in Oklahoma, Texas, the U.S. Courts of Appeal for the Fifth and Tenth Circuits, the U.S. Court of Appeals for the Federal Circuit, and the U.S. Supreme Court.

Founded in 1950, the College is composed of the best of the trial bar from the United States and Canada. Fellowship in the College is extended by invitation only and only after careful investigation, to those experienced trial lawyers who have mastered the art of advocacy and whose professional careers have been marked by the highest standards of ethical conduct, professionalism, civility and collegiality. Lawyers must have a minimum of 15 years trial experience before they can be considered for Fellowship, and membership in the College cannot exceed one per cent of the total lawyer population of any state or province in the United States or Canada.

The College strives to improve and elevate the standards of trial practice, the administration of justice and the ethics of the trial profession. Qualified lawyers are called to Fellowship in the College from all branches of trial practice. They are carefully selected from among those who customarily represent plaintiffs in civil cases and those who customarily represent defendants, those who prosecute the accused of crime and those who defend them. The College is thus able to speak with a balanced voice on important issues affecting the legal profession and the administration of justice 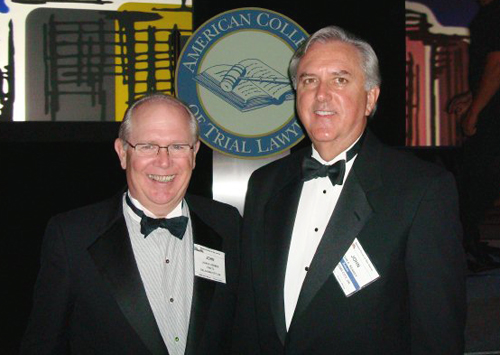 John Kenney (right) stands with John Hermes, a McAfee & Taft director and ACTL Fellow, at the annual meeting of the American College of Trial Lawyers during which Kenney was inducted as a Fellow of the premier legal association.

.
McAfee & Taft is Oklahoma’s largest law firm, serving clients throughout the region and nationally in the areas of aviation, business law, corporate and securities, employee benefits, entertainment law, environmental law, healthcare, intellectual property, labor and employment, litigation, oil and gas, real estate and tax and family wealth.  The firm employs 280 Oklahomans, including more than 145 attorneys, and has offices in both Oklahoma City and Tulsa.