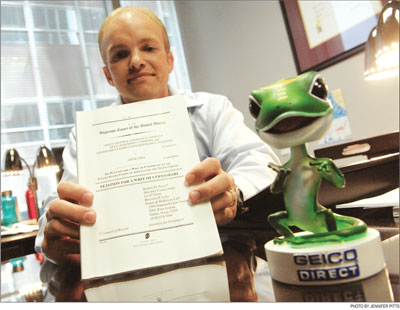 Brandon Long has only been an attorney for three years, but he’s already had a front-row seat at the top of the legal game, drafting the petition asking the U.S. Supreme Court to hear Geico General Insurance Co. v. Edo, on which the court ruled in June.

Long worked on the case with other attorneys while with the Dallas office of Baker & McKenzie, also coauthoring a merits brief.

The court combined the Geico case with another involving Safeco Ins. Co., which addressed similar issues. In general, the decision may make it more difficult for consumers to win lawsuits when they are not notified of insurance and other rate changes where their credit scores are reviewed.

Industry officials have said a negative finding could have subjected insurers to billions of dollars in damages.

The federal Fair Credit Reporting Act (FCRA) requires that consumers affected by adverse actions based in whole or in part on credit report information be given notice. Negligent violations entitle consumers to actual damages, with punitive damages possible for willful violations.

FCRA violations carry a penalty of up to $1,000 in actual damages for each violation, plus punitive damages. Like many insurance companies, credit scores are among factors Geico uses to select insurance rates for policies.

According to the high court’s opinion, Geico sends adverse-action notices only if a neutral credit score would result in a lower rate.

Ajene Edo’s credit score was taken into account when Geico issued a policy. However, the company did not send an adverse action notice because Edo’s insurance rate would have been the same with a neutral score. A federal district court found for the insurers, but the 9th U.S. Circuit Court of Appeals came down on the side of Edo. The class-action case was initially filed in Oregon.

Long, now with the McAfee and Taft law firm, said that both insurers and other businesses affected by FCRA needed to know what the term “willfully” means in terms of violations of the federal law.

“There was a circuit split over the meaning of that term,” he said.

Long said he and other attorneys for the insurance companies argued that an action should be deemed willful only if it involved actual knowledge that what a company was doing was wrong. He said the question of what constitutes an adverse action under FCRA was added as a second question for the court to consider in the Geico case.

“We were pretty passionate about the fact that we didn’t violate FCRA at all,” Long said.

Geico’s internal mechanism to determine when someone was treated adversely looked at the rate Edo was ultimately given, versus the rate he would have received had his credit not been considered, resulting in no difference, he said.

Long, who attended the oral argument in the case in Washington, D.C., said that Justice Stephen Breyer “hammered away” at what the plaintiffs wanted, which was effectively to send adverse-action notices to a huge portion of the customer base.

“My last day at Baker and McKenzie was sitting in the Supreme Court watching argument in this case,” he said. “It was really neat to see them argue over a case that you actually knew something about.”

He said Breyer and other justices seemed to be concerned that such massive notifications would have the effect that company privacy notices have had, which is to be generally ignored by consumers.

“The Supreme Court said we did not treat him (Edo) adversely, therefore he was not entitled to a notice,” Long said.

In a holding more relevant in the Safeco case, Long said the court held that an adverse action in determining insurance rates under FCRA includes first-time applicants for policies.

In the Geico case, Long said, the court set benchmarks by which adverse actions should be measured, giving insurers clarity with regard to when FCRA’s notice provisions come into play.

“It’s not a comparison between John Doe’s rate and what he would have received had he had the very bestpossible credit score,” he said. “You’ve got to look at how that person’s credit actually impacted them.”

The justices declined to accept the industry’s argument in favor of a straight actual-knowledge standard for willful violations, adopting instead a reckless-disregard standard, Long said.

The justices also held that Safeco may have violated the law, but did not act recklessly.