Making history: Mr. Mac’s registration of the first drilling fund with the SEC

This is the third of our year-long weekly history featurettes celebrating the firm’s 70th anniversary. (Please note: There is no audio in the above motion graphics.)

Intelligent. Creative. Adventurous. Curious. That’s how Jaci Williams described her dad, McAfee & Taft co-founder Kenneth McAfee. And it was a combination of all those traits that made him the consummate deal lawyer.

“He loved doing a deal. He loved standing and thinking about it, and then making a plan and diving in,” said Jaci. “He was just an adventurer.” 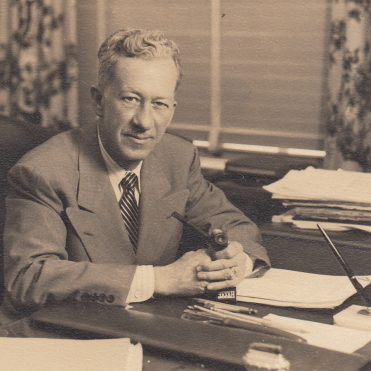 So it’s no surprise that this intelligent, creative, adventurous, curious deal-making lawyer would make legal (and oil and gas) history. In 1950, two years prior to the founding of McAfee & Taft, Mr. Mac represented Blackwood & Nichols Co., an Oklahoma City-based oil and gas operating company, along with joint venture partner Davidson, Hartz, Hyde & Dewey Inc., in the registration of the first oil and gas drilling program with the Securities & Exchange Commission.

When approached with the idea of registering the fund, the SEC didn’t quite know what to make of the proposal and questioned whether the fund should even be considered a security. At the time, the existing SEC forms were tailored to the registration of stocks and bonds, which meant they didn’t exactly “fit” this type of offering. But Mr. Mac insisted on it, having thoughtfully concluded that a security was, indeed, being offered to the public and that registration was required under the Securities Act of 1933. Further, he and his clients believed SEC registration would not only lend credibility to the deal, but would also be good for oil and gas investors. They would be proven right.

After meeting with SEC officials in Washington, D.C. to persuade them of these points and hammer out revisions to the final statement, Mr. Mac got his way. Registration No. 2-8663 was filed November 28, 1950. History was made.