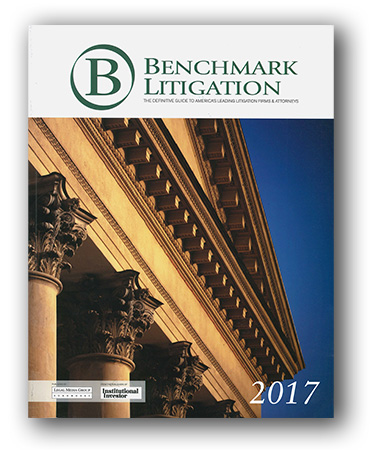 Nineteen lawyers from McAfee & Taft, Oklahoma’s largest law firm, have been singled out for inclusion in the recently released 2017 edition of Benchmark Litigation, a leading independent guide to the nation’s top trial lawyers and litigation firms.

In addition, the firm received the publication’s highest ranking of “Highly Recommended” in the state of Oklahoma. The ranking is reserved for law firms receiving the most mentions by peers and clients, and who are held as dominant in their particular jurisdiction.

Recognized as “Future Stars” were Jodi Dishman, Rodney Hunsinger, Ron Shinn and Todd Woolery. Earlier this year, Hunsinger was also named to the inaugural edition of Benchmark Litigation‘s “Under 40 Hot List” of top U.S. litigators under the age of 40.

Benchmark focuses exclusively on the U.S. litigation market, with a research team conducting extensive interviews around the country with leading private practice lawyers and in-house counsel. “Local Litigation Stars” are attorneys who are recommended consistently as reputable and effective litigators by clients and peers. Lawyers who are consistently recommended by peer partners, competitors and clients as litigators who are likely to appear as local litigation stars in coming editions are recognized as “Future Stars.”