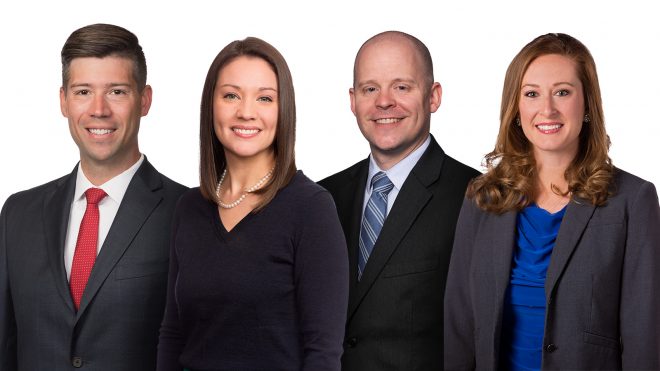 JohnDavid Brown is an aviation lawyer who represents clients in transactional matters involving the buying, selling, leasing, financing and registration of aircraft. His practice is primarily focused on aircraft matters that fall under the purview of the Federal Transportation Code, Federal Aviation Administration Regulations, FAA Aircraft Registry, and the Cape Town Convention on International Interests in Mobile Equipment and the Aircraft Protocol.

Jacob S. Crawford is a trial lawyer whose practice is focused on the representation of employers exclusively in all aspects of labor and employment law, including the litigation of disputes involving the Fair Labor Standards Act, Title VII of the Civil Rights Act of 1964, Americans with Disabilities Act, Age Discrimination in Employment Act, and Family and Medical Leave Act.

Paige Hoster Good is a trial attorney who represents employers in all phases of labor and employment law, including litigation before state and federal courts, regulatory and administrative agencies, and arbitration panels. In addition to defending lawsuits filed under Title VII of the Civil Rights Act of 1964, the Family and Medical Leave Act, the Americans with Disabilities Act, the Age Discrimination in Employment Act, and the Fair Labor Standards Act, she also represents clients by defending charges of discrimination investigated by the Equal Employment Opportunity Commission and other state agencies.