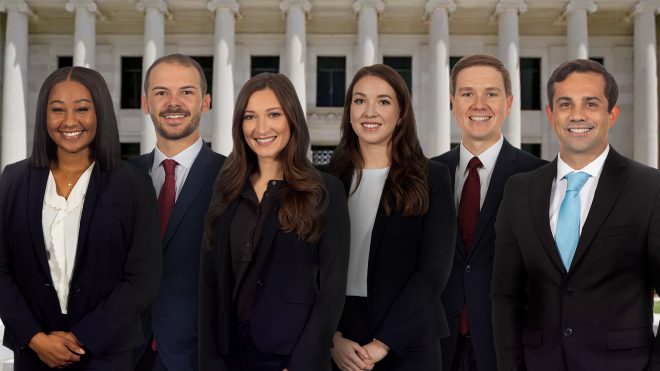 Alexis S. Barnes focuses her practice on the representation of employers and management in all phases of labor and employment law, including litigation in state and federal courts, before regulatory and administrative agencies, and in arbitration matters. Barnes graduated with special distinction from the University of Oklahoma with a bachelor’s degree in criminology in 2019 and with honors from the University of Oklahoma College of Law in 2022, where she served as assistant managing editor and research editor of the American Indian Law Review and received several honors, including the Bill Powell Guest Scholarship, the National Bar Association Gateway to Success Scholarship, and an American Jurisprudence Award for academic excellence.

Blaine W. Brewer is a transactional lawyer whose practice encompasses a broad range of corporate and business matters, including real estate transactions, mergers and acquisitions, divestitures, business entity formation, and transaction financing. Brewer graduated with special distinction with his bachelor’s degree in finance from the University of Oklahoma in 2019 and with highest honors from the University of Oklahoma College of Law in 2022. While in law school, he served as assistant articles editor and as a judicial committee member of the Oklahoma Law Review and worked as a legal extern for the Honorable Patrick Wyrick in the U.S. District Court for the Western District of Oklahoma. Brewer was also the recipient of several honors and awards, including the Comfort Scholarship, Captain Brian Wheeler Outstanding Write-On Competition Award, and four American Jurisprudence Awards.

Katherine Crowley Jimenez is a trial lawyer whose state and federal civil litigation practice is primarily focused on matters affecting the energy industry. Crowley earned her undergraduate degree in chemical engineering from the University of Oklahoma in 2018 and graduated summa cum laude from the Oklahoma City University School of Law in 2022. While in law school, she served as managing editor of the Oklahoma City University Law Review, earned nine CALI awards, and was the recipient of the Oklahoma Bar Foundation Chapman-Rogers Scholarship and the Oklahoma City University School of Law Outstanding Graduate Award. She also worked as a legal extern for the Oklahoma Corporation Commission for one year. Prior to entering law school, Crowley worked for Texas-based Nalco Champion, a supplier of fine chemicals for the petroleum industry, where she trained in refineries and chemical plants to provide chemical treatment and enhanced processes to customers in the oil and gas industry.

Garrett J. Reed is a trial lawyer whose practice is concentrated on business litigation before state and federal courts, arbitrations, and administrative proceedings, with an emphasis on matters affecting farmers, ranchers, equine owners, landowners, and agribusinesses. Reed earned his bachelor’s in agricultural science and natural resources (2017) and his Master of Science degree in agricultural economics (2019) from Oklahoma State University, after which he went on to graduate with honors from the University of Oklahoma College of Law in 2022, where he was named to the Order of the Coif. While in law school, he served as an assistant articles editor and candidate member of the Oklahoma Law Review, served as president of the OU Agricultural Law Association, and received five American Jurisprudence Awards.

Kiefer M. Rose is an ERISA attorney whose practice is focused on representing public and private companies, tax-exempt organizations, and governmental entities in a wide range of employee benefits and executive compensation matters, with specific emphasis on group retirement and health plan design, implementation, administration, and compliance. Rose earned his bachelor’s degree in organizational communication from the University of Central Oklahoma in 2015 and went on to graduate magna cum laude from the Oklahoma City University School of Law in 2022, where he earned a CALI award. His prior career experience includes co-founding and leading a youth ministry, working as a fitness trainer, and owning a strength and conditioning coaching business.

With more than 175 attorneys, McAfee & Taft is one of the nation’s 250 largest law firms as ranked by the National Law Journal.