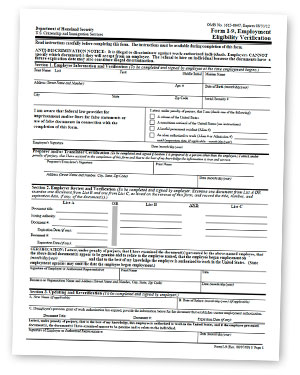 On April 14, 2011, the U.S. Citizenship and Immigration Service (USCIS) announced a new “final” rule regarding the process by which employers verify the identity and employment authorization of their newly hired employees. In the wake of that announcement and the ongoing federal I-9 audit initiatives, employers are properly questioning the status of their I-9 procedures. However, the new “final” rule merely adopted, without change, an interim rule that has been in place since April 3, 2009. Therefore, while the new “final” rule becomes effective on May 16, 2011, the changes that employers must implement in response will be somewhat minimal.

The most significant change brought about by both the interim and final rules is a prohibition against employers’ acceptance of expired documents to complete Form I-9s. According to USCIS, “expired documents are prone to tampering and fraudulent use,” and are therefore inappropriate for achieving the fundamental purpose of the Form I-9. Therefore, if they have not already done so, employers should immediately train relevant staff to identify and refuse to accept facially expired documents in the I-9 process. For the purpose of clarity, USCIS has made clear that “if a document does not contain an expiration date, as is often the case with a Social Security card, it is considered unexpired.”

The new final rule also adopted some more minor changes ushered in by the interim rule, such as adding and removing some particular items from the I-9’s List A category (documents which verify both identity and employment authorization simultaneously). By way of example, List A no longer includes Forms I-688, I-688A and I-688B, and now includes certain documents applicable to citizens of the Federated States of Micronesia or the Republic of the Marshall Islands.

If you have questions, please contact our labor and employment attorneys.

Labor and Employment Immigration and Compliance