HR Hero Line, a weekly e-zine from HRhero.com, highlighted a presentation given by McAfee & Taft employment attorney Charlie Plumb at the recent Advanced Employment Issues Symposium in Nashville, Tennessee. Speaking to an audience of human resources professionals from around the country, Plumb said the days when only unionized employers need to worry about the National Labor Relations Board (NLRB) are over.

“Number one, I think you are going to see increased efforts by unions to organize nonunion employers,” said Plumb, citing two main reasons for the increased efforts by unions. The first is that the unions need money, which means they need more members. The second reason is that the NLRB is very pro-employee right now, making it easier for unions to organize.

“The second trend I think we are going to see in 2012 is this idea that with the more active and proactive National Labor Relations Board, they are going to get involved in workplace issues that don’t involve unions,” Plumb said.

Plumb is editor of the Oklahoma Employment Law Letter and serves as leader of McAfee & Taft’s Labor and Employment Group, one of the largest of its kind in the region.

You can watch Brad Forrister’s interview with Charlie Plumb during AEIS by clicking here or the graphic below. 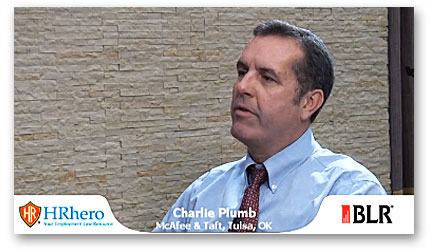