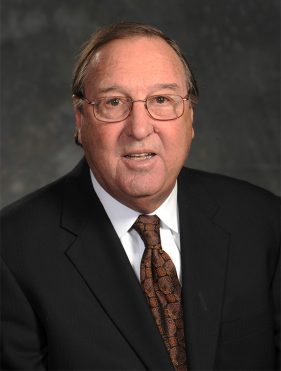 Born and raised in various cities and towns in Northwestern Oklahoma, Bob was the eldest child of Bob and Nell Gilliland. He spent his formative years in Woodward, where he made lifelong friends and learned the value of education from his mother while his father owned and operated the iconic Oasis Steak House. Bob and his father shared a passion for hunting almost any kind of bird with Labor Day dove hunts at the top of the list. Bob graduated from Woodward High School, where he excelled academically and was an All-State football player for the Boomers.

In the fall of 1959, Bob entered Texas Christian University, where he was encouraged by the coach to try out for the football team. It was a short tryout. He became a proud member of Kappa Sigma Fraternity and enjoyed an active social life making many new friends including Carol Martin, a lovely young lady from Winnsboro, Texas who later became Bob’s wife and the mother of their two children, David Gilliland and Virginia (Ginny) Starr Evans. In 1963, Bob earned a B.A. in International Studies (including advanced studies in French) and, on the day of his graduation, received his commission as a Second Lieutenant in the US Army.

After graduating from TCU, Bob enrolled at the University of Oklahoma College of Law where he became a member of the Board of Editors of the Oklahoma Law Review and the award-winning moot court team. Following his first year in law school, he married Carol in Winnsboro, Texas and brought her to Norman for the first time. In 1966, Bob earned his J.D in Law and prepared for active duty in the US Army.

Bob elected to apply for a branch transfer and served as a Captain in the U.S. Army Judge Advocate General’s Corps from 1966-1970; after attending JAG school at the University of Virginia, he was stationed at Fort Benning, Georgia and was later deployed to the Republic of Vietnam where he was awarded numerous citations including the Bronze Star for his meritorious achievement against hostile forces. Bob completed his military service at Fort Sill, Oklahoma as a prosecutor where he met, for the first time, several of his future law partners at McAfee & Taft. Following his discharge in 1970, Bob and his family moved to Oklahoma City where he pursued his lifelong ambition to be a trial lawyer.

For several years, he was employed by a prominent insurance defense firm and gained valuable experience at the high cost of excessive time on the road, low pay and multiple dog attacks when trying to find witnesses. In 1973, Bob’s friends from Fort Sill, who were young lawyers at McAfee & Taft, recommended that the firm offer Bob an associate position to beef up its fledgling litigation practice. Bob readily accepted and quickly became one of Oklahoma’s leading litigation attorneys. Bob had a wonderful career at McAfee & Taft and the firm’s Memoriam to Bob can be viewed at www.mcafeetaft.com/gilliland.

Bob and his family were dedicated members of All Souls’ Episcopal Church where Bob held multiple leadership positions including service on the Vestry, Junior and Senior Warden and President of the Anglican Foundation. Bob also actively participated on search committees for new Rectors of All Souls’ Church that selected Father James W. Law and Father Patrick E. Bright.

Following a long and courageous battle with cancer, Carol passed away in 2006. Bob later met and married the second love of his life, Ann Felton. Bob and Ann enjoyed an active civic and social life, interspersed with journeys to far off lands where the two shared their knowledge and appreciation of art, music, and history. Among many memorable journeys was a trip to Israel led by The Rt. Rev. Edward Konieczny, which resulted in a close relationship between Bob and Ann and Bishop Ed and his family.

An avid supporter of the University of Oklahoma, Bob was a lifelong Sooner fan, attending scores of OU football and basketball games at home and on the road with details of the trips to remain undisclosed to protect the innocent.

Bob was a dedicated volunteer who gave back to his community and actively participated in projects sponsored by Central Oklahoma Habitat for Humanity, Legal Aid Services of Oklahoma, Oklahoma Lawyers for America’s Heroes, Oklahoma Lawyers for Children, Gatewood School Literacy Program, and Whiz Kids.

After his retirement, following nearly 40 years at McAfee & Taft, Bob was appointed in 2013 by Governor Mary Fallin to the newly created Oklahoma Workers’ Compensation Commission where he served with distinction as a Commissioner and later as Chairman.

In 2019, Bob was appointed by Governor Kevin Stitt to serve as a member of the five-person Oklahoma Pardon and Parole Board where he was later elected as Chairman and presided over a large number of cases resulting from major Oklahoma criminal justice reform. In late 2020, Bob resigned his position for health reasons.

Bob’s funeral service will be held at All Souls’ Episcopal Church at 2 pm on Tuesday, March 2, 2021. Masks will be required and social distancing protocols will be followed. The service will be live-streamed for guests to join www.facebook.com/allsoulsokc.

In lieu of flowers, please consider honoring Bob by supporting construction of an affordable home in his name by Central Oklahoma Habitat for Humanity where Bob served as a volunteer and pro bono legal counsel for a number of years. Memorial donations may be mailed to Central Oklahoma Habitat for Humanity, 5005 South I-35 Service Road, Oklahoma City, OK 73129 or online at https://cohfh.org/habitat-restore/donate/donate-online/.