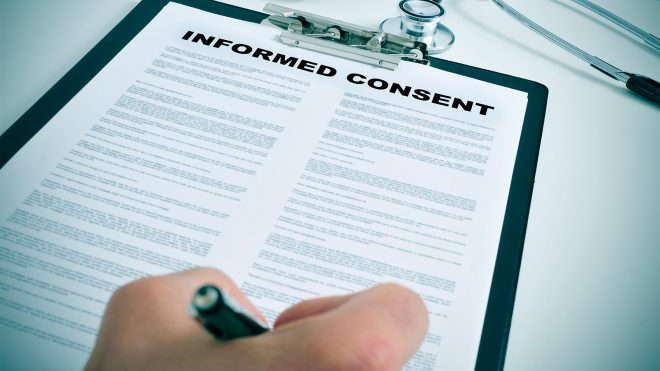 The Oklahoma Supreme Court has once again weighed in on the doctrine of informed consent and broadened the scope to include notifying the patient as to “who” will be performing “significant portions” of a medical procedure or surgery.

In Hurley v. Kirk, the defendant physician obtained her patient’s consent to perform a hysterectomy. The signed consent authorized the physician and whomever she designated as her assistants to perform the surgery. The court noted that the form contained a section to list individuals authorized to perform “significant surgical tasks,” but that section was not completed and was left blank.

The physician enlisted the assistance of a non-physician Certified First Assistant (who also held other certifications, including EMT and LPN) for the surgery. Specifically, the CFA, during the bilateral portion of the surgery and under the supervision and direction of the physician, placed a port on Hurley’s right abdomen for placement of laparoscopic instruments. The CFA cut and cauterized the right round ligament, the right utero ovarian pedicle and the right broad ligament, and cauterized the uterine artery, with the physician grasping the uterus to provide tension. The physician performed these same procedures on the patient’s left side. The evidence was conflicting as to who caused the injury to the right side of the patient’s ureter, with the CFA admitting he caused it and the physician denying that admission.

In light of this evidence, the Oklahoma Supreme Court determined that the physician had a duty to disclose to the patient that she would use a CFA and describe his involvement in performing the total laparoscopic hysterectomy. The court pointed to the consent form which required the designation of the physician’s portion of the procedure and other persons performing “significant surgical tasks,” as distinguished from non-disclosure of auxiliary personnel.

The court cited to Oklahoma’s hallmark informed consent case Scott v. Bradford in emphasizing the importance of full disclosure of all material risks incident to treatment. The court determined that delegation of surgical tasks to a non-doctor increases the risk of injury; therefore, the assistant’s involvement should be disclosed. The scope of the duty to inform is broad enough to include a physician’s duty to inform the patient “who” will be performing significant portions of the procedure or surgical tasks.

Hurley may change how a physician obtains a patient’s informed consent for surgical procedures. In addition to providing information about treatment, alternatives and risks, physicians should consider if any scheduled assistants, whether physicians or non-physicians, are performing significant portions of the procedure or surgical tasks. If so, physicians should discuss the assistant’s involvement with the patient and obtain written consent for the assistant to perform certain procedures. The Hurley case provides an example of tasks the court considers significant.

In all informed consent conversations, physicians should always ask themselves whether they provided enough information to allow the patient to make an informed choice about the surgery. In light of the previous pronouncements from the Oklahoma Supreme Court, and now Hurley, it is apparent that Oklahoma courts will require physicians to err on the side of caution by including rather than excluding information.

If you have any questions about informed consent, how changes in your practice should be implemented, or would like assistance in reviewing or evaluating your current practice, please do not hesitate to contact any of our healthcare lawyers.