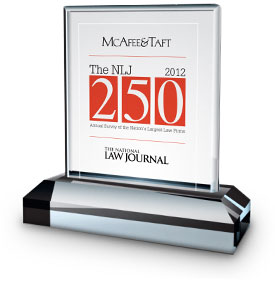 For the first time in its 35-year history, the National Law Journal‘s annual survey of the nation’s 250 largest law firms — the NLJ 250 — includes an Oklahoma law firm. McAfee & Taft, with offices in Oklahoma City and Tulsa, made its debut on the list ranked at No. 218.

“It’s gratifying to see Oklahoma making its first appearance on this notable list of the nation’s biggest players and largest firms,” said Richard Nix, McAfee & Taft managing director. “It’s just one more example of how our state is increasingly playing a significant role on the national stage.”

McAfee & Taft broke its way into the NLJ 250 after more than a decade of steady growth, with the greatest increases coming in the past four years following the opening of its Tulsa office in 2008. From 2008 to the NLJ 250 ranking period of 2011, the firm grew from 131 lawyers to 183 lawyers.

In spite of the overall increase in employment at NLJ 250 firms, only about half of those firms grew, with 118 firms adding headcount and 109 actually subtracting. Eight firms were flat and the remaining 15 were new to this year’s list, including McAfee & Taft.

“Our commitment to building this firm in a very intentional, strategic way has allowed us to grow even in challenging economic times,” said Nix. “By staying focused on the ever-changing needs of our clients and the value we’re able to consistently provide them, we’ve been able to both add new talent and enhance our services at a time when many large law firms have struggled to maintain the status quo and some have even lost ground.”