Oklahoma panhandle to be site of America’s largest wind farm 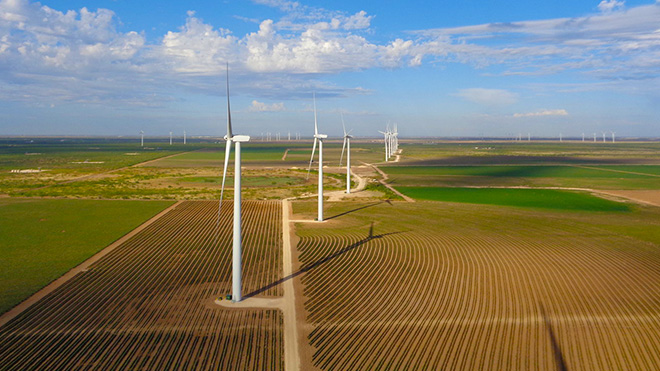 On July 26, 2017, Invenergy, along with GE Renewable Energy, announced a 2,000-megawatt wind farm that will be the largest in the United States and second largest in the world, once operational in 2020. The Wind Catcher facility is currently under construction in the Oklahoma panhandle and will generate wind electricity from 800 state-of-the-art GE 2.5 megawatt turbines.

“Wind Catcher shows American leadership in bringing low-cost clean energy to market at giga scale,” said Invenergy’s Founder and CEO Michael Polsky. “This project reflects Invenergy’s innovative spirit and unparalleled execution ability, and we are proud to be working with forward-looking utilities like PSO and SWEPCO whose customers and communities will benefit from this project for decades to come.”

Wind Catcher Energy Connection is expected to save SWEPCO and PSO customers more than $7 billion, net of cost, over 25 years. AEP estimates that the project will support approximately 4,000 direct and 4,400 indirect jobs annually during construction and 80 permanent jobs once operational. It also will contribute approximately $300 million in property taxes over the life of the project.

Chicago-based Invenergy and its affiliated companies develop, own, and operate large-scale renewable and other clean energy generation and storage facilities in the Americas, Europe and Asia. Not including Wind Catcher, Invenergy and its affiliated companies have developed more than 15,900 megawatts of projects that are in operation, construction or under contract, including wind, solar, natural gas-fueled power generation and energy storage projects.