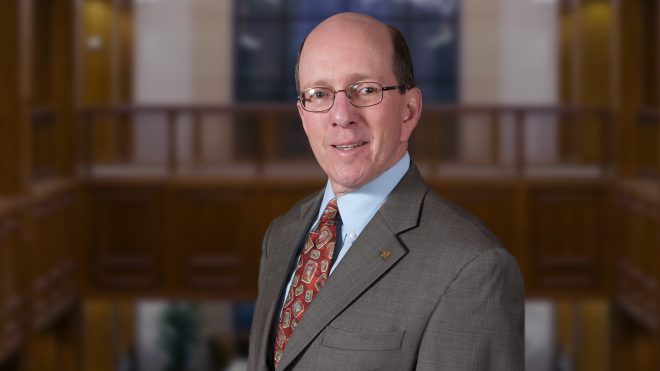 The OU Board of Regents today officially confirmed the selection of Professor Jonathan Forman as Kenneth E. McAfee Centennial Chair in Law at the OU College of Law.

Forman joined the OU Law faculty in 1985 after serving as a tax attorney in all three branches of the federal government. He teaches individual income tax, corporate tax, pension law, nonprofit organizations and tax procedure. His research focuses on tax and pension policy.

“Professor Jonathan Forman is a nationally renowned expert in tax and pension law, and our students benefit greatly from his expertise,” said OU Law Dean Joseph Harroz Jr. “His knowledge and research interests are advancing important national conversations on these topics, contributing to the public’s understanding and appreciation of employee benefits law. We are grateful to the McAfee family and to the McAfee & Taft law firm for their generous gift that significantly elevates the mission and prominence of OU Law.”

Established in 1989 as a professorship and later elevated to a chair in 1994, the Kenneth E. McAfee Centennial Chair in Law is named in honor of the legal legacy of one of the state’s pioneers in tax and corporate law.   McAfee, a certified public accountant and graduate of the University of Oklahoma College of Law, entered private practice in 1934 and later went on to become a founding partner of what is now the state’s largest law firm, McAfee & Taft. In addition to serving on the board of trustees of the University of Oklahoma Foundation and as an adjunct professor of law, he was instrumental in registering the nation’s first public drilling fund with the Securities and Exchange Commission.

“It is exceptionally fitting that Professor Jon Forman, a professor with a long and distinguished career in tax and business law, should be named as only the third holder of the Kenneth E. McAfee Centennial Chair in Law,” said Michael Lauderdale, managing director of McAfee & Taft. “In addition to being a brilliant tax lawyer, Mr. McAfee was an ardent supporter of the University of Oklahoma College of Law and its mission. He would be very pleased — as are we — with the selection of Professor Forman, as his outstanding credentials and passion for the law speak for themselves.”