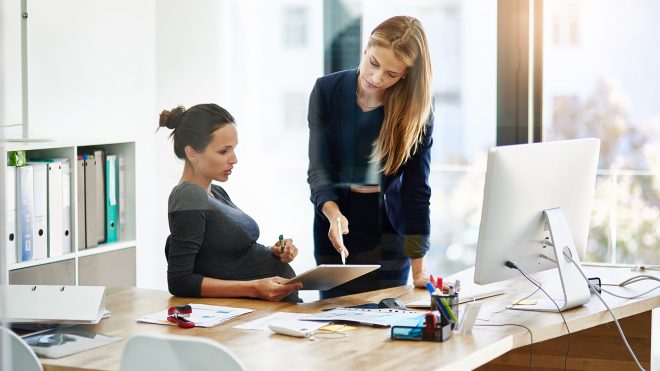 An employer’s shifting rationale for termination doomed it to facing a jury trial on a pregnancy discrimination claim in the recent case Fassbender v. Correct Care Solutions.

Alena Fassbender worked as a medication aide for Correct Care Solutions, LLC, a nationwide healthcare services company that contracts with jails and prisons to provide care for inmates. CCS had strict policies for its employees regarding fraternization with inmates. The policy broadly forbade undue familiarity with inmates, including removing any inmate correspondence from the facility.

During the spring of 2015, Fassbender and two other CCS employees at the Wyandotte County Detention Center in Kansas City, KS, were pregnant. Carrie Thompson, the center’s health services administrator and Fassbender’s boss, made several remarks about the pregnancies. First, when Thompson learned of Fassbender’s pregnancy, her response was “What, you’re pregnant, too?” A few days later, the supervisor also remarked, “I don’t know how I am going to handle all of these people being pregnant at once.” Around the same time, Thompson was overheard angrily telling an administrative assistant, “I have too many pregnant workers. I don’t know what I am going to do with all of them.”

A few weeks after the supervisor’s remarks, on April 30, Fassbender was working her regular shift when an inmate slipped a note into her medicine cart while she was distributing medicine in one of the cell blocks. Fassbender did not immediately read the note; instead, she took it home and read it that night. Fassbender was alarmed by the note’s contents, which suggested that the inmate knew personal information about her and wanted to have a sexual relationship with her.  Although the next day was her day off, Fassbender went to the detention center and reported the note to four individuals who worked there. These officials, in turn, telephoned supervisor Thompson and told her about the situation.

During her next shift on May 2, Thompson confronted Fassbender about the note.  After expressing her displeasure as to how Fassbender handled the situation and explaining that she should have given the note to a guard and immediately reported the incident to her, Thompson gave the aide a written warning for failure to follow proper policy.

Coincidentally, the very next day, on May 3, another inmate left a note on Fassbender’s cart while she was administering medicine. This time, Fassbender followed Thompson’s instructions. She gave the note to the guard and then immediately reported the incident to Thompson. Thompson asked Fassbender to fill out an incident report, which she did. On the same day, Thompson told Fassbender that she was suspended.

On May 6, Thompson called Fassbender and terminated her “because of the severity of CCS’s findings.” Fassbender contacted the human resources department to learn more about why she was fired, and on May 8, HR officials told her she was terminated for not reporting the first note sooner. When CCS found itself responding to Fassbender’s charge of pregnancy discrimination filed with the Equal Employment Opportunity Commission, the employer’s explanation changed.   In its position statement with the EEOC, CCS took the position that it had terminated Fassbender for a variety of reasons, including failing to report the inmate’s note to Thompson, failing to report the note the same day, and because she discussed personal matters within earshot of the inmate. CCS did not mention in its recitation of the events or reason for termination that she had taken the note home. Finally, once Fassbender filed a lawsuit for pregnancy discrimination, CCS asserted that it terminated Fassbender solely because she took correspondence from an inmate home in violation of the fraternization policy.

In the lawsuit, CCS asked the court to find in its favor, arguing that Fassbender failed to present sufficient evidence for a rational jury to find that CCS’ stated reason for firing her was untrue. Although the trial court agreed with the employer, the court of appeals reversed the trial court’s decision, finding that Fassbender was entitled to have a trial where a jury would decide her claims of pregnancy discrimination.

First, the appeals court found that Thompson’s comments about pregnant employees “arguably reflect an animosity toward the protected group (. . . pregnant women . . . ) and even a desire to have fewer members of the protected group as employees.”  More importantly, the court found “sufficient suspicion surrounding Fassbender’s termination to send this case to a jury.” The court found that Thompson’s comments, when combined with CCS’ “failure to consistently identify exactly why it terminated her” was sufficient evidence of pretext for Fassbender’s pregnancy discrimination case to reach a jury. Additionally, the court noted that a jury could find Thompson’s failure to follow internal CCS policy (by requesting Fassbender’s termination without attaching a narrative explanation of the reasons for termination) to be suspicious.  Finally, the court held that Fassbender’s appropriate handling of the second inmate note, which demonstrated her trainability, could also be viewed by a jury as evidence that CCS’s reasons for the termination were pretext for pregnancy discrimination.

There are several important takeaways from this case for employers.  Here, CCS may have had legitimate explanations for its behavior.  Thompson’s remarks regarding pregnancy could demonstrate the supervisor’s frustration at the prospect of staffing and scheduling concerns regarding maternity leave, and not an expression of animosity toward pregnant women. However, because CCS could not keep its story straight about the reasons for Fassbender’s discharge, and because it did not follow its own internal policies for termination, the remarks which might be regarded as innocuous or stray remarks in another case become circumstantial evidence of pregnancy discrimination.

Employers would do well to remember to follow their own policies on discipline and termination. Moreover, if the supervisor and the HR department cannot articulate the same or even similar reasons for an employee’s termination, that is a sign that there has been an internal miscommunication within the organization that should be addressed. Finally, it is never a bad idea to remind supervisors that pregnant women are a protected group under the law. The best response to an employee revealing her pregnancy is always “congratulations!” not “What, you’re pregnant, too?”