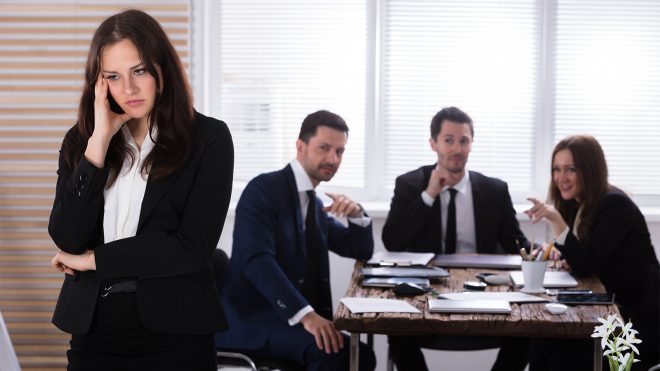 Title VII of the Civil Rights Act of 1964 does not prohibit all harassing conduct. Rather, the harassing conduct must be “because of” sex. A recent decision by a federal appeals court provides employers with an opportunity to reflect on the difficulty of handling sexual rumors in the workplace, particularly in the context of differing judicial interpretations on what conduct is “because of” sex.

The most recent case involving sexual rumors is Parker v. Reema Consulting Services, Inc. Evangeline Parker alleged sexual harassment and retaliation claims under Title VII as a result of employees circulating false rumors that she obtained her promotion to assistant operations manager because of a sexual relationship with a high-ranking manager. The highest-ranking manager of the facility allegedly participated in spreading the rumor by holding a group meeting where the rumor was discussed. In another meeting, he allegedly blamed Parker for bringing gossip into the workplace. Parker was terminated approximately one month after she complained to human resources about the rumors and associated conduct.

However, the appeals court held that Parker sufficiently alleged a hostile work environment based on sex, and it reinstated her claims. Noting that a male allegedly started the rumor and that those who allegedly spread the rumor were all male, the appeals court said the trial court failed to take into account the “sex-based nature of the rumor or its effects.” Further, Parker’s complaint “plausibly invokes a deeply rooted perception – one that unfortunately still persists – that generally women, not men, use sex to achieve success. And with this double standard, women, but not men, are susceptible to being labelled as ‘sluts’ or worse, prostitutes selling their bodies for gain.’”

Other courts have taken different approaches to sexual rumors in the workplace, grappling with whether conduct was taken “because of” sex in violation of Title VII. The requirement that actionable conduct under Title VII be “because of” sex is seemingly simple. However, application of the “because of” standard becomes complicated, with some courts recognizing the gender-based nature of the harassing conduct with respect to sexual rumors in the workplace, while others have failed to do so and have interpreted “because of” sex in a more simplistic manner. For these courts, the stumbling block is the “equal opportunity harasser.”

Rumors found to be sexual harassment

The earliest case in which a court recognized that sexual rumors are “because of” sex was Jew v. University of Iowa. Jew claimed she endured for more than 10 years false rumors that she engaged in a sexual relationship with her married male department head . A male faculty member told other faculty, graduate students, and staff that Dr. Jew had been seen having sexual intercourse in the workplace, that she and her department head had been seen together coming out of a motel, and that Dr. Jew received preferential treatment due to that relationship. She was called “slut,” “bitch,” and “whore.” Sexually suggestive cartoons depicting the two were posted in the workplace. A federal trial court concluded these rumors amounted to sexual harassment because they “accused her of physically using her sex as a tool of gaining favor, influence and power with the head of the department, a man, and suggested that her professional accomplishments rested on sexual achievements rather than achievements of merit.” In contrast, the court noted that there were not rumors that the head of the department was using a sexual relationship to gain favor, influence, and power with an administrative superior. “Were Dr. Jew not a woman, it would not likely to have been rumored that [she] gained favor with the department head by a sexual relationship with him.”

In McDonnell v. Cisneros, a male and female plaintiff filed claims for sexual harassment based on the same sexual rumors. The rumors began when anonymous letters were sent to their employer accusing them of job-related sexual misconduct. The allegations included a claim that the female plaintiff was the male plaintiff’s “in-house sex slave” and that she provided him with sexual favors in exchange for more rapid promotion and other preferential treatment. The rumors circulated widely and included allegations about incest and that the male plaintiff fathered the female plaintiff’s child. The rumors made both employees pariahs in the workplace. These claims were rejected by the McDonnell trial court because the conduct was directed at both a man and a woman.

The McDonnell appeals court concluded that sexual rumors, even those about a man and a woman, can indeed be sexual harassment under Title VII. The court reasoned that “[u]founded accusations that a woman worker is a ‘whore,’ a siren, carrying on with her coworkers, a Circe, ‘sleeping her way to the top,’ and so forth are capable of making the workplace unbearable for the woman verbally so harassed.” The appeals court reasoned, “[b]y a further stretch of the concept a male supervisor for whom life is made unbearable by baseless accusations that he is extorting sexual favors from his subordinates could also be thought a victim of sexual harassment.” The court rejected the employer’s “too literal” argument that the harassing conduct was not “because of” sex because it was directed at both a man and a woman.

Rumors found not to be sexual harassment

On the other hand, several courts have determined that sexual rumors were not “because of” sex because they were about a man and woman’s sexual behavior – so-called “equal opportunity harassment.” In Lewis v. Bay Industries, Inc., a Wisconsin federal trial court held that workplace rumors about a woman and her boss were not actionable. Kyla King was promoted from receptionist to travel manager, and rumors were circulated that she was having sex with the male president of the company and had received the promotion and gifts as a result. These rumors were spread by administrative support staff and upper-level executive employees. King was also subjected to disparaging comments, some of which were gender-based. When her co-worker, Timothy Lewis, complained to management on Ms. King’s behalf, he was eventually fired. He filed a retaliation claim under Title VII and the trial court held that Lewis could not have reasonably believed that King was subjected to discrimination on the basis of sex because the rumors were about both a male and female.

In Duncan v. City of Denver, the Tenth Circuit Court of Appeals (with jurisdiction over Oklahoma employers), used the same rationale when it ruled in favor of the employer, despite years of harassing conduct endured by Cynthia Duncan, a Denver police officer. Duncan alleged there were widespread rumors that she was having sex with her superiors, including rumors that she had sex with her sergeant on the captain’s desk. On one occasion, “concerned officers” sent an anonymous letter to the mayor with salacious allegations about numerous officers, including Duncan. The letter asserted that she had been sleeping with the deputy chief, had received promotions because of this sexual liaison, and had also been having sex with another deputy chief. This letter fueled stories that she had achieved her rank in exchange for sexual favors. A second anonymous letter was sent after Duncan was transferred to another office, claiming that Duncan used sexual relationships with superiors to gain influence.

What does this mean today?

The #MeToo movement and an increasing awareness of gender issues in society inevitably affects the judiciary. Contemporary feminists refer to the practice of criticizing a woman’s real or perceived sexual promiscuity as “slut-shaming.” This is based on the double standard where women are called to task for their sexuality; men are congratulated for the exact same behavior. The concept of “slut-shaming” manifests itself in the spreading of sexual rumors in the workplace where a female employee has engaged allegedly in sexually promiscuous behavior with a male superior or co-worker. In effect, accusing a woman of being sexually promiscuous calls into doubt her desirability as a competent and professional employee and colleague. Increasingly, courts recognize this gender-based insult is offensive because it is based on gender stereotypes that “good” women are not sexually promiscuous – thus, sexual rumors are deemed “because of” sex. This trend is likely to continue.

Bottom line: Don’t turn a blind eye to rumors of preferential treatment in the workplace. Rumors alleging a woman is sexually promiscuous essentially accuse her of violating gender norms for female behavior. Suggestions that a female employee has slept her way to success have a very real effect of harming her reputation and credibility in the workplace. Courts increasingly recognize that the “equal opportunity harasser” defense makes little sense in these instances. Employers should train managers to be sensitive to this gender issue and human resources must take steps to stop sexual rumors when they start.