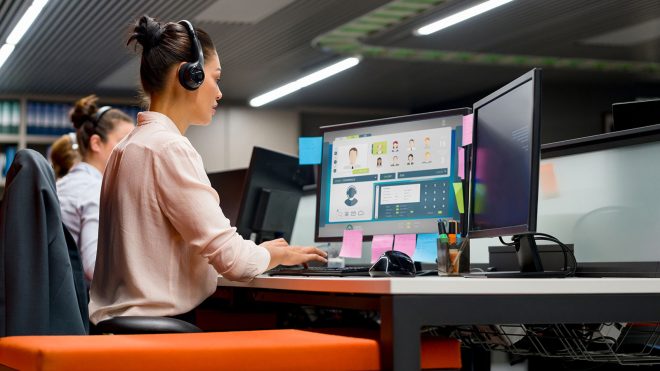 For some employees, getting their work computer up, running, and ready to perform each day is a complicated and time-consuming process. When should an employer pay for that daily process?

Customer Connexx, LLC operated a call center that provided customer service and scheduling for an appliance recycling business. Call center agents like Cariene Cadena were hourly paid, non-exempt employees who were responsible for handling customer service and scheduling calls. The employer’s policy prohibited off-the-clock work and required employees to record the actual hours they worked each day. Employees used a computer-based timekeeping system to record their starting and ending times.

The call center’s telephone system operated through the employees’ computers rather than through traditional telephones. To record their starting times, call center agents first had to turn on their computers and log in using a username and password. According to Cadena and others, depending on which computer an employee used that day, it took anywhere from one to 20 minutes for computers to boot up so they could clock in for their workday.

After clocking in, call center agents loaded programs and material they used, confirmed their telephone was working, and began accepting calls from customers.  At the end of their shift, they closed out the software programs they had used during the day and clocked out. Next, call center agents logged off and shut down their computers. According to Cadena and other agents, this last process took anywhere from one to 15 minutes each workday, depending on the computer used.

Their claims for unpaid work time

Tasks before and after a shift

Under the FLSA, time spent on tasks before or after an employee’s regularly scheduled shift should be treated as work time and compensable if those tasks are “integral and indispensable” to the employee’s regular duties. In other cases, courts have decided that the following pre- and post-shift activities may count as work time:

In this case, the Ninth Circuit Court of Appeals agreed with the call center agents’ claims that they could not clock in and begin performing their primary duties of answering customer calls and scheduling customer appointments without first engaging in the integral and indispensable task of booting up their computers.  Therefore, the time spent booting up their computers at the start of their shifts was compensable under the FLSA.

Notably, the court focused only on the pre-work task of starting up the computer and did not address whether the time spent shutting down a computer at the end of the shift was compensable.  Reasoning that shutting down computers was not integral and indispensable to their primary responsibility of answering calls, the Ninth Circuit remanded to the lower court the question of whether the post-work task was a principal activity in and of itself and, therefore, compensable.  The district court is also set to decide whether the de minimis doctrine applies in this case.

Is the “pre-work” clock ticking?

The FLSA requires employers to record and pay for all hours actually worked. Some jobs require preparation before work responsibilities can be performed. If that is the case in your workplace, it makes sense to review your pay practices to see if employees are being properly paid for preparatory tasks that are necessary for them to carry out their work responsibilities.