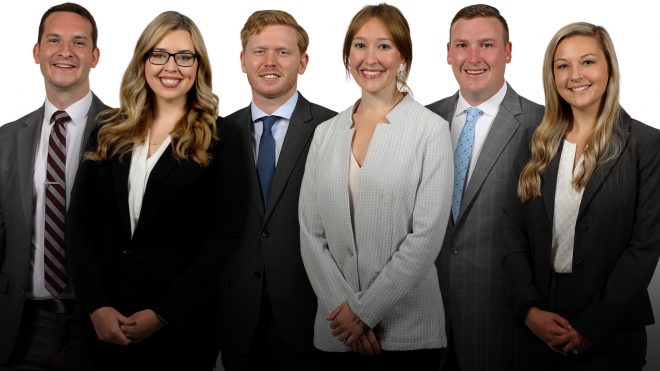 Jennie Mook advises clients on a broad range of transactional and litigation matters in oil and gas law, renewable energy, and environmental compliance. The transactional component of her practice includes negotiating oil and gas leases, drafting industry-related agreements, business entity formation, transaction financing, and providing environmental regulatory guidance for existing facilities as well as new construction. She graduated with highest honors from the University of Oklahoma College of Law in 2021. While pursuing her Juris Doctor, she served as an articles editor for the Oklahoma Law Review and as a judicial extern for the Honorable Robert E. Bacharach of the U.S. Court of Appeals for the Tenth Circuit, was named to the Order of the Coif and National Order of Scribes, and received six American Jurisprudence Awards.  Mook was also a recipient of numerous scholarships and honors, including the Comfort Scholarship, the Oklahoma Bar Foundation Fellowship, and the Holloway Scholarship recognizing academic excellence and leadership. Prior to graduating, she held leadership positions in numerous student organizations, including the student chapter of the Federal Bar Association, the Environmental Law Student Association, and the Organization for Women in the Law.

Kyle Reather is a registered patent attorney whose practice encompasses all areas of intellectual property law, including patents, trademarks, copyrights, trade secrets, and related licensing and litigation.  He has been registered to practice before the United States Patent and Trademark Office since 2020. He is a contributing author and editor of the Oklahoma chapter of U.S. State Trademark and Unfair Competition Law, a comprehensive reference guide published annually by the International Trademark Association.  Reather received a bachelor’s degree in chemical engineering, with special distinction, from the University of Oklahoma in 2018, and graduated with honors from the University of Oklahoma College of Law in 2021, where he was named a Comfort Scholar and earned five American Jurisprudence awards.

McKenzie Ryan is a trial lawyer who counsels and represents employers and management in all phases of labor and employment law, including litigation in state and federal court courts, in arbitration matters, and before regulatory and administrative agencies, including the Equal Employment Opportunity Commission (EEOC) and U.S. Department of Labor.  Her litigation practice includes the defense of employers against claims of discrimination, harassment, retaliation, and wrongful termination, as well as disputes involving wage and hour claims and the proper classification of workers.  Ryan earned her bachelor’s degree in human relations from the University of Oklahoma in 2017 and graduated with highest honors from the University of Tulsa College of Law in 2021. While pursuing her Juris Doctor, she served as an articles editor for the Tulsa Law Review and worked as a judicial extern for The Honorable Gregory Frizzell of the U.S. District Court for the Northern District of Oklahoma. During McKenzie’s 3L year, she also served on a budget planning committee for the Tulsa Law Review’s symposium commemorating the 100th anniversary of the Tulsa Race Massacre.

Gatlin Squires is a trial lawyer whose civil litigation practice is concentrated on business litigation before state and federal courts, arbitrations, and administrative proceedings, with an emphasis on matters affecting farmers, ranchers, equine owners, landowners, and agribusinesses.  As a member of the firm’s Agriculture & Equine Industry Group, Gatlin represents agricultural entities and producers in general business litigation disputes, landowners in condemnation and inverse condemnation actions, and agriculture producers and landowners in matters involving the acquisition, ownership, transfer and protection of water rights.

Squires earned his undergraduate degree in agricultural sciences and natural resources from Oklahoma State University and graduated with highest honors from the University of Oklahoma College of Law in 2021, where he was named to the Order of the Coif and Order of Solicitors. While pursuing his Juris Doctor, he served as research editor and candidate mentor of the Oklahoma Law Review won the Calvert Moot Court competition, founded the OU Agricultural Law Association, and received several honors, including the Comfort Scholarship and three American Jurisprudence Awards.

Lauren Swinney is a transactional lawyer whose practice encompasses a broad range of corporate and business matters, including business entity formation and organization, mergers, asset and stock acquisitions and divestitures, transaction financing, and contract drafting, review and negotiations.  Swinney graduated with a bachelor’s degree in economics from Oklahoma State University in 2018 and with honors from the University of Oklahoma College of Law in 2021.  While in law school, she served as a note and comment editor of the Oklahoma Law Review, worked as a teaching assistant for the first-year Legal Research and Writing course, and was a member of the Organization for the Advancement of Women in Law and Phi Delta Phi legal fraternity. She was also the recipient of the William T. Comfort Scholarship and four American Jurisprudence Awards.