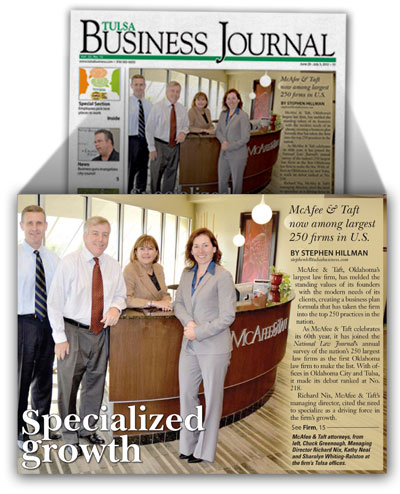 McAfee & Taft, Oklahoma’s largest law firm, has melded the standing values of its founders with the modern needs of its clients, creating a business plan formula that has taken the firm into the top 250 practices in the nation.

As McAfee & Taft celebrates its 60th year, it has joined the National Law Journal‘s annual survey of the nation’s 250 largest law firms as the first Oklahoma law firm to make the list. With offices in Oklahoma City and Tulsa, it made its debut ranked at No. 218.

Richard Nix, McAfee & Taft’s managing director, cited the need to specialize as a driving force in the firm’s growth.

“In some ways we always fall back and maintain the same objectives that Mr. McAfee and Mr. Taft had,” he said. “Obviously it has been a winning strategy, but the world has changed too much to think that what worked back even in the ‘80s and the ‘90s and all the way back, still works. You have to adjust, and we have adjusted dramatically.”

Nix said the standard of an attorney functioning as a generalist is a thing of the past.

“You were literally an expert on whatever issue came in through the door,” he said. “But now it’s a world of specialists. You better identify one, two or three areas that, no matter what the issue is, whether it is local, regional, national or international, you can help the clients, because if you can’t, they will go find someone who can.”

While the firm’s strategy has stayed much the same since its beginnings—service the clients and keep the eye on the ball (the clients’ needs)—clients’ needs and business plans now change quickly and dramatically, Nix said.

“We have to be able to change on a dime and stay in front of that,” he said. “Some of the things Mr. McAfee and Mr. Taft always stressed was to get out and see the clients and make sure you understand what they are trying to do. How you solve those problems has changed dramatically. We needed to make sure we had the specialties that would service the clients as their business strategies have changed.

“That’s the reason for our growth. As is true with almost every industry in the world, the practice of law has become a group of specialists and specialties. If you want to help a client, they really don’t want you cutting your teeth on their project. It’s too big a deal for them, so they go where there is experience, expertise and depth.”

McAfee & Taft broke its way into the NLJ 250 after more than a decade of steady growth, with the greatest increases coming in the past four years following the opening of its Tulsa office in 2008. From 2008 to the NLJ 250 ranking period of 2011, the firm grew from 131 lawyers to 183 lawyers.

Despite an overall increase in employment shown in the NLJ 250 survey, only about half of those firms grew, with 118 firms adding head count and 109 actually subtracting. Eight firms were flat and the remaining 15 were new to this year’s list, including McAfee & Taft.

“Our commitment to building this firm in a very intentional, strategic way has allowed us to grow even in challenging economic times,” said Nix. “By staying focused on the ever-changing needs of our clients and the value we’re able to consistently provide them, we’ve been able to both add new talent and enhance our services at a time when many large law firms have struggled to maintain the status quo and some have even lost ground.”

Nix credited much of the firm’s growth since 2008 to the strength of the momentum in the Tulsa market, even though the opening of the firm’s Tulsa office preceded the failure of Lehman Brothers and the following recession by only a short time.

“Although some people would say May of ’08 sounds like it would be a bad time to enter a market, it has actually been just the opposite,” Nix said. “We already had some strong relationships and clients here, but putting our footprint here, prior to all of that going on, we were able to gain more momentum from that.”

Nix said the firm started with eight attorneys in Tulsa and now has about 40 lawyers here.

“We really love how that has occurred, and we like the direction that Tulsa and the eastern part of the state is going,” he said. “We think we are well-positioned to the point where we think a lot of our growth, if not a majority of our growth as a firm, will be in this area because of the talent of the employers and the companies that are here. We like where they are going.”

In addition to the NLJ 250 ranking, McAfee & Taft has also racked up a number of other recent accomplishments and recognitions, including:

The firm’s reputation and accomplishments has allowed it to not only attract the best talent, but, perhaps more importantly, to retain them, Nix said.

“When people want to talk about our growth, they have a tendency to be impressed with is the fact that we have been able to get a Joyce Paul or an Eldridge Cooper to merge with us,” he said. “Those are great lawyers, and there are a lot of firms that tried to do that over the years, and we were fortunate enough that they elected to come and work here, but to me the big issue is not to convince a lawyer that they should come work for our firm, it’s the fact that when they come here, they stay. Our retention rate is second to none.”

Nix also stressed that the firm’s successes and accomplishments are a reflection of its clients, and has drawn the attention of other firms around the country.

“The fact that Oklahoma has a firm that has broken into the NLJ 250 is a reflection that Oklahoma, in a very difficult time and a difficult part of the economy, seems to be weathering incredibly well, and, in fact, a number of our clients are seizing this time as an opportunity to enhance the areas in which they have an expertise and increasing their market share,” he said. “If you would look at our history, you would see that our growth would parallel the growth of Oklahoma and our clients and employers in Oklahoma. And, unlike prior years where the East and West Coast kind of did their own thing and didn’t really focus on the Midwest, we have a lot of contemporaries who are looking in the beltway, and Oklahoma in particular, and saying how are you doing this, what are you doing now? We have hit radar screens we have not hit before.”