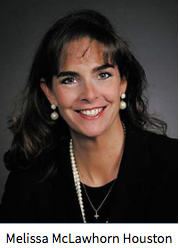 Commissioner Melissa McLawhorn Houston of the Oklahoma Department of Labor spoke before a crowd of nearly 300 attendees at EmployerLINC2016, McAfee & Taft’s labor, employment and employee benefits seminar, held in Tulsa on April 5, 2016. In her presentation, she provided an overview of her agency’s programs and responsibilities and described effective regulation not as an adversarial relationship between businesses and the government, but as a partnership.

After her presentation, she sat down with Tulsa World business writer Samuel Hardiman to discuss the issues of budget deficits and regulation, including whether there were any undue regulatory burdens that could be eased in order to cover some of the state’s budgetary gap. She responded by saying that her agency has been looking into the matter and has yet to find any areas of duplication or excessive regulation. Instead, she said, she’s seeing an attitude of cooperation and partnership.

“When you have that kind of regulation – when you’re partnering with a business – then it isn’t overly burdensome,” said Houston. “Companies want the public to be safe. They don’t set out to see anyone hurt. That’s not their goal. They don’t profit from that.”