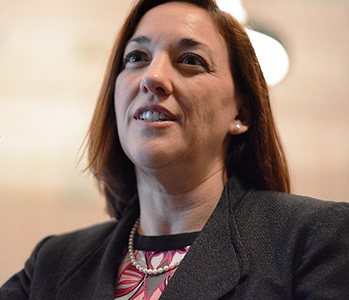 The Oklahoma Bar Foundation honored Susan Shields, a shareholder with McAfee & Taft, with its prestigious Roger Scott Memorial Award during the Oklahoma Bar Association’s 2014 annual meeting on November 14, 2014 in Tulsa, Oklahoma. The award honors those who have gone above and beyond the demonstrate their voluntary commitment and dedication required to sustain the vitality and growth of the Foundation through continued active recruitment of new fellows from the ranks of the membership of the Oklahoma Bar Association as well as other significant efforts on behalf of the OBF.

The award is named after Roger Scott, an Oklahoma lawyer who served as a trustee of the Oklahoma Bar Foundation from 2003 to 2009.

Shields served on the Oklahoma Bar Foundation Board of Trustees from 2007 through 2014, including as an officer from 2010 – 2014 and as its president for the 2013 term. She also served on numerous task force and committees and chaired the audit committee for five years. In 2010, she was honored with the OBF President’s Award for outstanding service. Shields also previously served on the OBA Board of Governors and is the current OBA vice president.

Shields is a tax attorney whose practice is focused on wealth transfer tax planning for high net worth families and individuals, business planning for closely held family businesses, estate and trust administration, business entity formation, and the formation and administration of tax-exempt organizations. Her achievements have earned her election into the prestigious American College of Trust and Estate Counsel and inclusion in several leading industry publications, including The Best Lawyers in America and Oklahoma Super Lawyers, in which she has also been named to its exclusive list of “Top 50 Oklahoma Lawyers” and “Top 25 Women Lawyers.”

The Oklahoma Bar Foundation is a nonprofit organization founded in 1949 by members of the Oklahoma Bar Association to accomplish law-related charitable good works statewide.