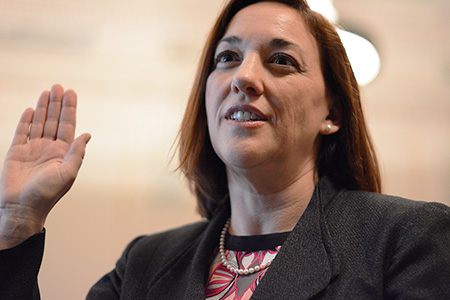 McAfee & Taft shareholder Susan S. Shields was sworn in as vice president of the Oklahoma Bar Association Board of Governors during a ceremony at the state Capitol January 10, 2014. She was among nine attorneys sworn in as officers and board members for the professional association of Oklahoma lawyers.

The 17,500-member Oklahoma Bar Association, headquartered in Oklahoma City, was created by the Oklahoma Supreme Court to advance the administration of justice and to foster and maintain learning, integrity, competence, public service and high standards of conduct among Oklahoma’s legal community.

Shields practices in the areas of estate and family wealth planning, estate and trust administration, business planning and charitable organizations. She has also previously served as the leader of the firm’s Tax and Family Wealth Group.

Shields has been a frequent speaker on a variety of estate planning, probate and non-profit topics for continuing legal education seminars and at other seminars. She has also served as adjunct professor in estate planning at the OU College of Law. She is an elected fellow of the American College of Trust and Estate Counsel.

Shields’ experience and expertise have earned her recognition in The Best Lawyers in America and Oklahoma Super Lawyers, where she has consistently been named to its prestigious “Top 25 Female” and “Top 50 Oklahoma Lawyers” lists. She has also been recognized as Outstanding Pro Bono Lawyer by Legal Aid of Western Oklahoma in 1993, received the Oklahoma Bar Association’s Earl Sneed Award in 2005 and its Mona Salyer Lambird Spotlight Award in 2011, named to The Journal Record‘s list of Leadership in Law honorees in 2011, and a two-time finalist for The Journal Record‘s Woman of the Year Award (2005 and 2010).

Shields earned a bachelor’s degee with honors from Stanford University in 1986 and her juris doctorate from the UCLA School of Law in 1989.