Griffin is a trial and appellate lawyer and former federal law clerk whose practice encompasses a broad range of business and corporate litigation, including complex business litigation, contract disputes, and class actions at the state and federal levels.  A portion of his practice is dedicated to defending insurance companies against claims of bad faith and extracontractual liability, breach of contract, breach of fiduciary duty, negligent underwriting, and violations of consumer protection laws.

Prior to joining McAfee & Taft in 2021, Griffin served as a law clerk to the Honorable Callie V. S. Granade, senior judge in the U.S. District Court for the Southern District of Alabama, and as a litigation associate in the Birmingham and Mobile, Alabama, offices of Burr & Forman, LLP.

Griffin holds an undergraduate degree in environmental economics and management from Mississippi State University and a Juris Doctor from the Washington and Lee University School of Law. While pursuing his law degree, he worked as a judicial intern for the Supreme Court of Mississippi, chaired the school’s moot court executive board, was named “Best Advocate” at the Fordham University School of Law National Basketball Negotiation Competition, and was named the winner of the American Bar Association’s Regional Negotiation Competition in Baltimore, MD, as well as the Robert J. Grey, Jr. Negotiations Competition at Washington and Lee School of Law.

With more than 175 attorneys and offices in Oklahoma City, Tulsa and Springfield, McAfee & Taft is one of the nation’s 250 largest law firms as ranked by National Law Journal. 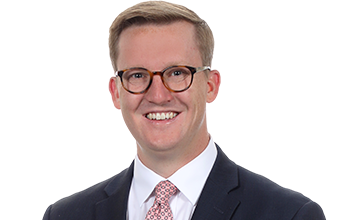