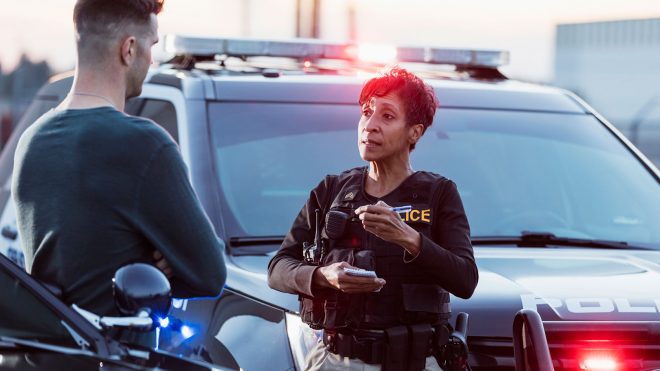 Charmaine McGuffey worked in the Hamilton County, Ohio, Sheriff’s Office (HCSO) for 34 years. When Sheriff Jim Neil promoted McGuffey to the rank of major, she was the first woman to hold that rank in the HCSO.  McGuffey received accolades from the private and public sector concerning her work in corrections. Sherriff Neil’s performance evaluation of McGuffey was glowing; he described her as his “favorite major.”

Despite her own successes, McGuffey believed female officers were not treated with respect, nor were they promoted properly. When she reported to Sheriff Neil and Chief Deputy Schoonover that two subordinates acted disrespectfully towards her, she was told: “These guys just don’t like working for a woman” and “You’ve got to get along with these guys.”  A male sergeant told McGuffey that he should have her job – not McGuffey. The same sergeant accused McGuffey of interfering with Internal Affairs’ use-of-force investigations. Eventually, two junior officers told McGuffey that “the men who work for you did not like her style of supervision.”

The complaint and investigation

Heather Dobbins began working as McGuffey’s administrative assistant in 2013. In late 2016, Dobbins became unhappy working with McGuffey over what she considered was mistreatment and sought a transfer. She got that transfer in December, and in January 2017, Dobbins filed a formal complaint against McGuffey. Among other allegations, Dobbins stated “McGuffey bullied me and made me do things that were not in my job description.”

The HCSO investigated Dobbins’ complaint and concluded McGuffey had created a hostile work environment and had been dishonest.  After the investigation was completed, Chief Deputy Schoonover recommended to Sheriff Neil that McGuffey be fired. Based on the investigation’s report, Sheriff Neil offered McGuffey a demotion to a civilian position or face termination. When McGuffey refused the demotion, she was fired.

The investigation and the lawsuit

McGuffey filed a lawsuit against the HCSO contending that her firing was discriminatory and was based upon her gender and/or her sexual orientation. The HCSO denied acting discriminatorily, explaining its decision was based upon the investigation and its determination that McGuffey was responsible for a hostile work environment for those under her supervision. Based on the “unusual nature” of HCSO’s investigation of McGuffey, a federal court found that a jury would decide whether McGuffey’s firing by HCSO was discriminatory. The court noted that there had been seven previous “hostile work environment” complaints lodged against heterosexuals and men in the HCSO, and the manner in which McGuffey’s investigation was handled by Internal Affairs was “dramatically different.”  For example:

Unsurprisingly, of the eight “hostile work environment” claims, McGuffey’s investigation was the only instance where an employee’s complaint was sustained.

Keep this in mind

When you receive reports of misconduct, discrimination, unfairness and the like, it’s always best to take those claims seriously. Conducting a prompt workplace investigation is invaluable. But throughout your investigation, make sure the manner in which the investigation is conducted is not only thorough, but also will be viewed as even-handed by someone else – like a judge or a jury.