McAfee & Taft labor and employment attorney Peter Van Dyke was the lead negotiator for CSC Applied Technology (CSC) in labor negotiations that ended a two-week labor strike by the civilian workforce at Vance Air Force Base, Okla. CSC is a subsidiary of Computer Sciences Corporation, a multi-national corporation headquartered in Falls Church, VA, which has a worldwide workforce of 92,000 employees in 80 countries. Both are clients of McAfee & Taft.

CSC is the prime contractor for the Vance workforce.  All aspects of base operations are performed by civilian workers employed by CSC and the other contractors — from lawn maintenance workers to aircraft mechanics, and virtually everything in between. These workers are represented by the International Association of Machinists and Aerospace Workers, AFL-CIO, District Lodge 171 and its Local Lodge 898 (IAMAW).  The IAMAW’s lead negotiators were John Crowdis, an Aerospace Coordinator for IAMAW, and Jerry McCune, the Directing Business Representative for IAMAW District Lodge 171.

The union’s opening proposal included economic demands that would have amounted to more than $27 million increased cost to the government. The union proposed few non-economic issues.

CSC’s initial contract proposal centered on language changes it believed were essential for the efficient performance of its contractual responsibilities to the U.S. Air Force, as well as a modest economic package in line with economic settlements elsewhere. Its proposal included changes to an enhanced drug and alcohol testing program that would help ensure that workers providing critical services to the military were not impaired by drugs or alcohol; a strengthening of the employers’ ability to have lead positions staffed by workers qualified to do the work, rather than a selection process that was based solely on seniority; tighter controls on the use of unscheduled paid time off in a effort to curb abuses that had sometimes resulted in delays in flight operations and increased overtime costs; and a change in how firefighter call-in overtime was calculated, closing a loophole that often resulted in abuses of the overtime policy and increased overtime costs.

CSC also proposed the elimination of an expensive group insurance plan to be replaced with a less costly plan and an increase in the percentage of employee contributions to the two group medical plans being offered by CSC.

The union’s initial response to the CSC proposal was that it would not consider the changes sought, and that unless all proposals were withdrawn, the union would strike. Notwithstanding CSC’s offer to extend the expiring contract so that the parties could continue bargaining, the union chose to strike at midnight on June 8th.

After two weeks on strike, the union indicated a willingness to resume bargaining. The union ultimately agreed to the changes sought by CSC and dropped most of the economic demands it initially sought, settling for an economic package that included an annual wage increases of 3.75%  and a 20-cent per hour annual increase in CSC’s pension contribution.  The proposed contract was ratified by the union membership on June 22nd, with employees returning to work on June 23rd.

Van Dyke said that this strike and labor dispute could have wider implications.

“The labor unrest at Vance Air Force Base is significant, in that it is causing the military to reassess its reliance on civilian, privately employed workers,” he said. “The lesson at Vance is that under current law an organized civilian workforce having the right to strike can shut down a military operation, even in war time.“

Van Dyke, a shareholder with McAfee & Taft, has more than 35 years of experience representing management in labor matters and is generally considered to be one of the best labor practitioners in the region. His achievements in the area of labor and employment law have earned him recognition and inclusion in Chambers USA Guide to America’s Leading Lawyers for Business, The Best Lawyers in America, Oklahoma Super Lawyers, Who’s Who in American Law and the Labor Relation Institute’s list of “Top One Hundred Labor Attorneys in the United States.”

McAfee & Taft’s Labor and Employment Group is one of the largest of its kind in the region and represents management exclusively in all areas of labor and employment law. 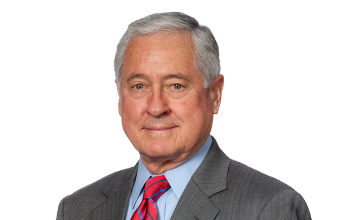