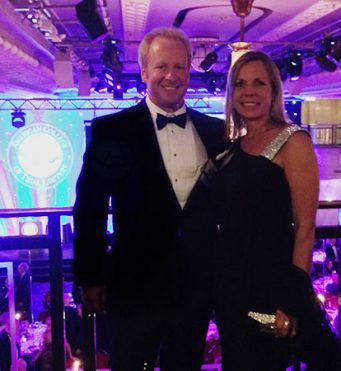 Bill Leach with his wife Janice at the induction ceremony

Bill Leach, a shareholder with the law firm of McAfee & Taft, was inducted as a Fellow of the American College of Trial Lawyers at the organization’s annual meeting in London, England, on September 12. He joins a select group of trial lawyers in what is widely considered to be the premier professional trial organization in the United States.

Leach is a veteran trial lawyer who has tried nearly 100 cases to verdict in Oklahoma and surrounding states and has argued numerous appeals in both state and federal courts. He has successfully tried jury cases for clients in the insurance, utility, trucking and transportation, securities, manufacturing and service industries, and concentrates his practice on insurance claims and coverage disputes, product liability defense, mass torts and class action litigation, multidistrict litigation and complex business litigation.

Leach’s achievements in the area of commercial litigation have also earned him inclusion in the Chambers USA Guide to America’s Leading Lawyers for Business, The Best Lawyers in America and Oklahoma Super Lawyers.

In addition to his litigation practice, he serves as an adjunct settlement judge in the Eastern District of Oklahoma and as an adjunct professor of trial advocacy at the University of Tulsa College of Law. Leach is also a frequent speaker and continuing legal education teacher on trial practice.

The newly inducted Fellow is a 1982 graduate of the University of Oklahoma College of Law. Upon graduation, he began private practice in Texas and became one of the youngest attorneys to complete the requirements for dual certification in personal injury trial law and civil trial law by the Texas Board of Legal Specialization. He has practiced in Oklahoma since 1990 and is admitted to practice in all state and federal courts in Oklahoma and Texas, the U.S. Courts of Appeal for the Fifth and Tenth Circuits, and the U.S. Supreme Court.

Founded in 1950, the College is composed of the best of the trial bar from the United States and Canada. Fellowship in the College is extended by invitation only, and only after careful investigation, to those experienced trial lawyers who have mastered the art of advocacy and whose professional careers have been marked by the highest standards of ethical conduct, professionalism, civility and collegiality. Lawyers must have a minimum of 15 years trial experience before they can be considered for Fellowship, and membership in the College cannot exceed one per cent of the total lawyer population of any state or province in the United States or Canada.

McAfee & Taft is one of the nation’s 250 largest law firms as ranked by the National Law Journal and serves clients throughout the region and nationally in the areas of aviation, business law, corporate and securities, employee benefits, entertainment law, environmental law, healthcare, intellectual property, labor and employment, litigation, oil and gas, real estate and tax and family wealth. The firm employs 350 Oklahomans, including more than 180 attorneys, and has offices in Oklahoma City and Tulsa.