We Remember: A Tribute

On the morning of April 19, 1995, the lives of so many were forever changed. Survivors, family members, rescue workers, a whole city, an entire state, and even a nation were shaken, heartbroken and inescapably altered. The domestic terrorist truck bombing of the Alfred P. Murrah Federal Building in Oklahoma City killed 168 people and injured more than 680 others, many of whom were left permanently disabled. The blast destroyed or damaged 324 other buildings within a 16-block radius, shattered glass in 258 nearby buildings, and destroyed or burned 86 cars, causing an estimated $652 million worth of damage.

For many, even though more than 25 years have passed since that fateful morning, the memories are as tangible today as they were then. One of the ways we honor those who were lost and the countless many more who were forever altered by that day is “to remember, educate and learn … the story of those who were killed, those who survived and those changed forever.”

In this tribute, we remember.
.

.
Melissa McLawhorn Houston, survivor and member of the Oklahoma City National Memorial Foundation Board of Trustees: “For me, I was just sitting at my desk and then all of a sudden all my hair blew straight up. So I took the wind, and then the ceiling caved in and then the walls and all that, but you never really heard anything because we were too close to hear it.”

Frank D. Hill, McAfee & Taft shareholder and past chairman of the Oklahoma City National Memorial Foundation Board of Trustees: “There was quite a bit of traffic at that point in time, and there was a light at Broadway and Sixth, so we were traveling in a westerly direction pretty slowly, and finally crossed Broadway heading west. All of a sudden, there was a very powerful sound, and I actually saw the reverberation of that sound as it traveled to the north through the Journal Record building that was very visible. Also, I was driving my son’s car and it left the ground, it was actually off the ground, and the mirrors fell off the car both internally and externally. I quickly realized that there were shreds of paper floating through the air, debris. It was almost as if it were snowing or some kind of a heavy rain, and almost covered up the sun for a while. So we had no idea, obviously, at that point what was happening.”

Robert L. Garbrecht, McAfee & Taft shareholder and member of the Oklahoma City National Memorial Foundation Board of Trustees: “My first son was due to be born right around that time, and so I was running a little bit late coming down to the office. Drove right by the Alfred Murrah Building five minutes, 10 minutes before the bomb detonated. Came up to my office, was in there logging on, someone came into my office, I looked up at the window to see who was coming in, and that very moment is when the bomb exploded. My window, when I was looking at who was coming into my office, was vibrated back and forth kind of like a piece of paper if you blew on it, which is hard to describe, but it was probably three inches or so coming back and forth. And then immediately to the south, all of the buildings, the First National Building, I just saw the windows popping out and glass falling down to the floor, and it was just horrific sights.” 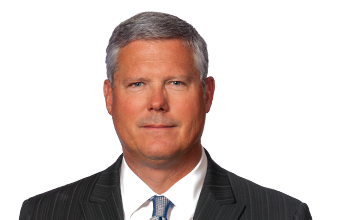