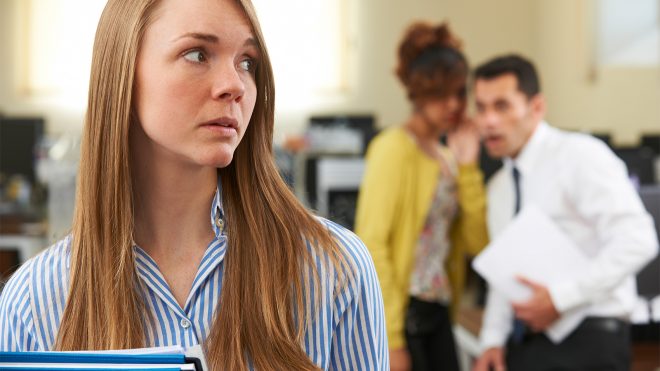 As long as people work together, gossip and personal disputes are sure to occur. Sometimes employers feel like they’re acting in the role of a counselor or umpire of personal problems rather than managing a workplace.

But there are cases in which unchecked gossip at work can rise to the level of actionable harassment. Under those circumstances, you don’t have the luxury to write off employee disputes as something “personal” and ignore what is happening.

Southwest Allen County School Corporation (SACS) is an Indiana public school corporation serving township schools, including one high school, two middle schools, and six elementary schools. It employs 66 school bus drivers, most of whom drive two routes in both the morning and afternoon.

Heather Billings drove students to and from three schools. According to her, she was targeted by a group of coworkers who referred to her as “skinny bitch,” “back-stabber,” and “whore.” The harassers, who included both male and female drivers, not only accused her of flirting and “not acting in the way a lady should” but also spread several false rumors claiming she was having affairs with other drivers. When Billings became pregnant, coworkers openly talked about whether the baby was her husband’s or a coworker’s. After she gave birth, someone placed a card in the coworker’s mailbox to congratulate him on the birth of his new baby with Billings.

Billings knew the rumors and gossip were occurring. She went home crying and complaining about it to her husband. She learned that some bus drivers were also “talking bad about her” to the students on her bus routes. Generally, the alleged harassers didn’t target male drivers with gossip or rumors.

Billings confronted two female coworkers in the parking lot about statements they had made about her on the bus system’s radio. When confronted, one of the coworkers screamed at her, accused her of being a male coworker’s lover, and said she would do everything she could to get her fired. Billings was particularly upset about this incident because the statements were made in front of her nine-year-old son, who was in the car with her at the time.

Approximately two years later, Billings’ coworkers circulated a rumor that she and a different male driver were having an affair. She again complained to the director of transportation and said she had been sexually harassed at work for years. The director told her to not let such things bother her and encouraged her to deal with it by approaching the people who were spreading the rumor.

The following year, Billings was counseled by management about her personal appearance and was warned not to sit on the dashboards of buses while she was visiting with other drivers and waiting for students. A male coworker accused her of “flipping him the finger,” which she denied. At that point, Billings made her third complaint and stated that she had been experiencing harassment for years. She told the director of transportation that she believed the coworkers were trying to get her fired. She provided the employer with a list of drivers she said were targeting her for sexual harassment.

Two months later, a cafeteria worker at one of the schools reported that she had repeatedly seen students standing while Billings’ bus was in motion, which was a violation of safety policy. After reviewing video recordings from Billings’ bus, the director of transportation and SACS decided to terminate her employment.

Billings filed a lawsuit in federal court asserting that her termination was in retaliation for her multiple complaints of sexual harassment and thus violated Title VII of the Civil Rights Act of 1964. SACS took the position that her complaints of rumors and gossip about sexual relationships also affected male coworkers. Therefore, it contended the gossip couldn’t be sexual harassment because it wasn’t related to Billings’ gender.

There are cases in which gossip and rumors in the workplace can be actionable harassment under Title VII. That can occur when the acts or statements are aimed at a particular gender. According to Billings, the gossipmongers targeted her and other female employees almost exclusively. The only instances in which male employees were the targets of gossip were when they defended her.

There was no question that Billings had complained about her ongoing mistreatment to HR and the director of transportation on at least three different occasions. The accusations toward her were invariably based on the fact that she is a woman. When the HR director noted the need to schedule sexual harassment training for the bus drivers, the employer obviously recognized the gossip was related to her gender.

The court refused to dismiss the case, and a jury will now decide whether Billings’ termination was in retaliation for her complaining about sexual harassment by coworkers. Billings v. Southwest Allen County School Corp., 1:12-CV-184 (N.D. Ind., 10/17/13).

Keep your eyes and ears open

While it may be tempting to avoid involvement in employees’ squabbles and gossip as something “personal,” they can’t be ignored. In addition to detracting from productivity and creating an unprofessional work environment, gossip and personal attacks can evolve into something that, if left unaddressed by you, can be actionable as harassment.