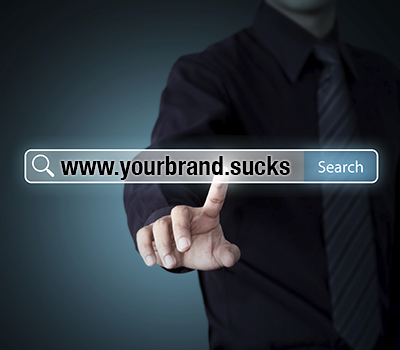 The Internet Corporation for Assigned Names and Numbers, also known as ICANN, is currently in a multi-year process of rolling out hundreds of new generic top-level domains (gTLDs). ICANN’s rationale for the expansion: competition – a virtual world of more than 1,000 gTLDS such as .bike and .bank in addition to the commonly known .com, .org and .net. This expansion requires that private entities manage the domains created by the new gTLDs, which are being auctioned off one at time, many to private, for-profit groups. Unfortunately, however, business owners are sure to think one of the newest gTLDs “sucks.”

In November 2014, Vox Populi Registry Ltd. paid more than $3 million for the right to operate the gTLD “.sucks.” General availability for new .sucks domains opens up on June 21, 2015, so the world can expect an array of privately held .sucks websites directed to negative commentary about brands, celebrities, politicians and perhaps even private citizens. Although a disgruntled customer or former employee could easily use existing gTLDs to create a “yourbrandsucks.com,” regardless of the availability of yourbrand.sucks, the new .sucks domains provide a new and perhaps more novel opportunity of online commentary. The .sucks gTLD has also been a specific focal point of brand owner outrage, as many view it as a way to extort brand owners. The reason: Vox’s pricing structure for the new domains.

According to its website, www.nic.sucks, Vox is providing a window to trademark owners called the “sunrise period” to secure .sucks domains incorporating their trademarks. Companies hoping to secure domains during this period must, however, have certificate of registration with ICANN’s Trademark Clearinghouse, which requires a federal trademark registration or a foreign equivalent. The price for these domains? A controversial $2,499, which is exponentially more than the few dollars being charged by registries operating other gTLDS and substantially more than the price that will be charged to the general public after the sunrise period. General availability pricing for .sucks domains is $249 annually for “standard” domains, and a “suggested” price of at least $299 annually for “premium” domains, which are still dramatically higher than the average price of a domain, which is generally about $10 per year. A list of the so-called “premium” domains has not yet been published, however, and the price for those domains remains a suggestion subject to change. Many assume these “premium” domain names will correspond to well-known brands.

Vox’s general availability period was originally set to begin on June 1, 2015, with the sunrise period ending March 30, 2015. However, according to its website, the sunrise period has been extended to June 19, 2015, with general availability beginning on June 21, 2015. Beginning September 1, 2015, Vox will also offer a “Consumer Advocate Subsidized” domain package, which will allow private consumers to purchase a .sucks domain for $9.99, but which requires that the domain redirect to www.everything.sucks, a consumer advocacy site that will provide a free hosted consumer discussion forum.

Fear of negative publicity and anger over the perceived pricing disparity for trademark owners is the rationale behind companies’ cries of price-gouging. In a congressional subcommittee hearing last month, Rep. Darrell Issa of California characterized the business model as “legalized extortion.” According to the Wall Street Journal, ICANN states that it approved the .sucks gTLD because no one objected to its release, and that it now lacks authority to block the new domains or control their pricing. However, even ICANN recently asked federal regulators to investigate the situation. Vox has strongly denied any wrongdoing, going so far as to threaten defamation suits over the recent accusations of extortion. In an interview with Law360 last month, Vox’s founder, John Berard, maintained that the .sucks platform is for “legitimate critical commentary,” and that Vox’s critics have ignored the fact that its prices apply equally to brand owners and individuals unaffiliated with the brand.

While it is unclear how .sucks domains will be displayed by search engines such as Google, Google has previously indicated that the company’s search algorithms will treat new gTLDS just like existing gTLDs. So, a .sucks website will presumably end up in a result of any Google search for the brand corresponding to the .sucks domain.

As a result, companies are left with the decision of subjecting themselves to Vox’s pricing scheme or hoping someone will not buy and use a .sucks site to attack their company and brand. State defamation and fraud laws should provide companies recourse against .sucks domain owners who publish libelous or false information. The .sucks domains will also be subject to ICANN’s trademark protection and enforcement mechanisms as well as federal laws that regulate use and registration of domains. Both federal law and ICANN procedures provide for a transfer of a domain to a successful claimant, however, both also require infringement of a trademark and “bad faith” by the domain registrant in order for the claimant to be successful. Some companies have succeeded in obtaining the transfer of a traditional domain used for negative commentary (e.g., yourbrandsucks.com). However, UDRP and judicial decisions have also ruled against trademark owners in cases where the domain is used for criticism or parody and is found to be noncommercial and not in “bad faith,” generally relying on the free speech protections afforded by the First Amendment.

George Carlin once said that “the status quo sucks.” Companies may disagree insofar as gTLDs are concerned. Although brand criticism has existed as long as there have been brands, the .sucks platform provides yet another way for others to use the Internet to criticize your business, and the .sucks pricing structure certainly does not make that possibility any more palatable.